Caster Semenya has accused world athletics' governing body the IAAF of using her as "a human guinea pig" to test its testosterone limit for intersex athletes and said it can never be allowed to happen again.

The double Olympic 800 metres champion was reacting to the publication of the Court of Arbitration for Sport's written decision to reject her appeal against the IAAF's 'eligibility regulations for the female classification (athletes with differences of sex development)'.

That hugely controversial decision was announced at the beginning of May but only a summary of the three-strong panel's ruling was available until Tuesday when sport's highest court published the full, 163-page verdict on its website.

Semenya has since taken her fight against the regulations, which would force her to take medication to suppress her high level of the primary male sex hormone, to the Swiss Federal Court - a move that has once again indefinitely delayed the introduction of the testosterone limit.

There has been no date set for when it will hear the 28-year-old South African's appeal but the battlegrounds for when it does have been clearly laid out in the CAS ruling.

Both sides called numerous experts on genetics, medical ethics, and sports science to make their cases with the panel unanimously agreeing with Semenya's team that the regulations are "discriminatory" but, by a 2-1 verdict, deciding they were a "necessary, reasonable and proportionate" way of protecting the integrity of female athletics.

Semenya, who is also a three-time world champion and won her 30th straight victory over two laps just two days after the decision was announced, strongly rejects this and has said she will not reduce her testosterone below the disputed limit of five nanomoles per litre of blood serum. 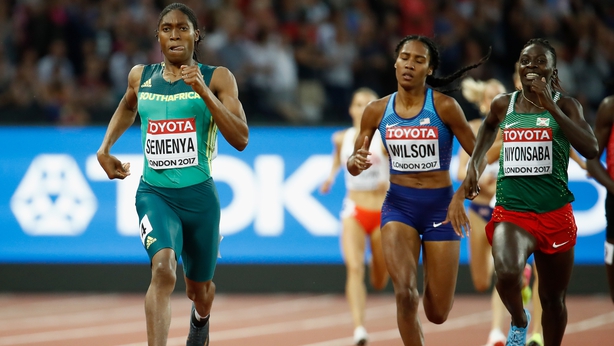 Complying with that rule, which would currently only apply to track events between 400 metres and a mile, would have a marked impact on her times and health.

The reason she can say this with confidence is that she complied with an earlier version of these rules between mid-2011 and 2015 before Indian sprinter Dutee Chand challenged them at CAS and forced the IAAF to come back with its new, more targeted regulations.

But while those rules were in place, Semenya took contraceptives to reduce her testosterone below 10 nmol/L, a threshold twice as high as the new one and endured the least successful period of her elite career.

In a statement, Semenya said: "The IAAF used me in the past as a human guinea pig to experiment with how the medication they required me to take would affect my testosterone levels.

"Even though the hormonal drugs made me feel constantly sick, the IAAF now wants to enforce even stricter thresholds with unknown health consequences. I will not allow the IAAF to use me and my body again.

"But I am concerned that other female athletes will feel compelled to let the IAAF drug them and test the effectiveness and negative health effects of different hormonal drugs. This cannot be allowed to happen."

These comments come from a 1,200-word response to the CAS ruling which also highlights the fact the panel unequivocally agreed that Semenya was born and raised a woman, and that has been recognised in law.

CAS was also unimpressed with the IAAF's evidence to support the testosterone limit in the 1500 metres and mile events and praised Semenya's conduct and dignity.

But in perhaps the most significant section of the ruling in terms of Semenya's hopes of a successful appeal, the two members of the panel who believe the limit is proportionate only did so on the assumption that athletes could comply with the regulations by taking oral contraceptives.

If, the ruling states, it is found that some have to take stronger medication, with greater side effects, or even undergo surgery, "a different analysis of proportionality would need to be undertaken".

And as Semenya's legal team have repeatedly pointed out, the World Medical Association has already told its members it believes it would be "unethical" for doctors to prescribe oral contraceptives to female athletes so they can meet the IAAF's rules