Irish athlete Rob Heffernan has said he has not made any decision on retirement after it was widely speculated that his eighth place finish in the 50km walk at the World Athletics Championships would be his final race.

The European Athletics Championships are set for Berlin in 2018 and Heffernan hasn’t ruled out competing at the event.

"I’d love to develop the sport here in Ireland put something back in and maybe the best way to do that is by still taking part," he told Kathryn Thomas on the Ray D'Arcy Show.

"There is a European Championship next year and the fact that I am still competing at the highest level is a factor. I reckon I was only 85 or 90 percent the last day and I was eighth."

The five-time Olympian said that he will be exploring all options and evaluating everything over the next month.

"Last night was the first night I slept in my own bed. I’ve been sleeping out the back in the log cabin or else I’d be in the mountains in Spain.

"You are completely focused on the job you have to do and it takes a while before you settle and regroup."

"People have been asking me if I am going to be coaching in Ireland and I have had offers to go coaching abroad.

"I’m going to evaluate everything over the next few months, take a break and see what floats my boat. I’m not going to make any rash decision. You are institutionalised for last 11 months you need to take a step back."

A massive thanks for all the support yesterday & lovely messages 🏃#driveon #London2017 pic.twitter.com/3DoVLe4rgZ

Heffernan who finished sixth in Rio last summer has an impressive medal tally.

He was fourth at the London Games but was upgraded to the podium last November after Russian Sergey Kirdyapkin - who'd won the gold - was retrospectively suspended during specific periods between 2009 and 2012 for doping.

Heffernan produced an impressive performance on Sunday crossing the line in a strong finish that lifted him six places in the final 10km.

But he admitted he wasn’t feeling 100 percent ahead of Sunday’s race; he had a throat infection and had to cut back his training beforehand.

"You don’t want to focus on it; you want to keep everything positive," he said.

"What went wrong could I have done better could things have gone worse you are just taking everything into account." 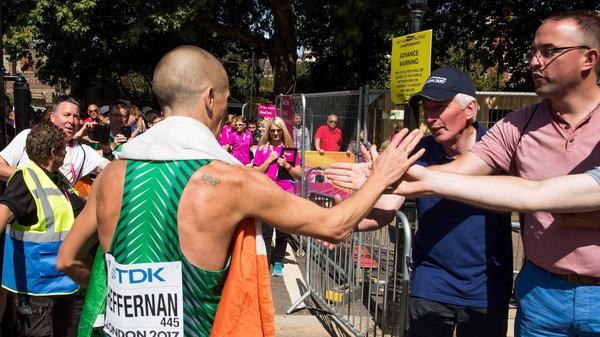