Rob Heffernan said "it's time for me to help the new generation" and admitted he's likely to retire after finishing eighth in the World Championships 50km walk.

The Corkman produced a terrific performance in London, crossing the line in a strong finish that lifted him six places in the final 10km.

He was fourth at the London Games but was upgraded to the podium last November after Russian Sergey Kirdyapkin - who'd won the gold - was retrospectively suspended during specific periods between 2009 and 2012 for doping.

He received his medal in a special City Hall ceremony in Cork. 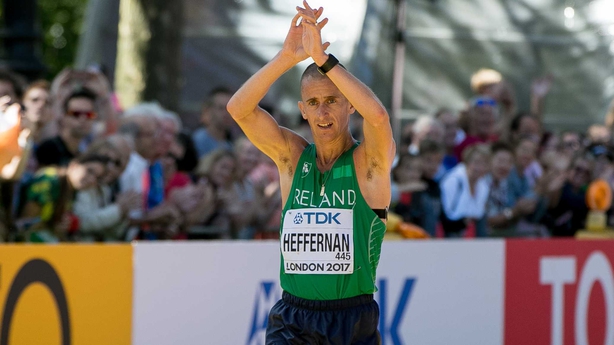 "It's hard to evaluate everything now but I'm happy I finished on a positive note," the 39-year-old told RTÉ Sport afterwards.

"I always said when I come off the top and I'm not challenging for medals, I know it's still eighth in the world, but I think it's time for me to help the new generation now and go out at the top and put my experience back there.

"I've done enough in the sport. I think my career has gone on so long because I've got such great support at home from everyone in Ireland. It's given me such a buzz.

"The body just lost that desire to be massively competitive and to massively hurt.

"I missed things with my kids, missed going to their races and their matches and it's a hard life.

"My body doesn't have that desire, that rawness that I had when I was younger. The last 10k is okay but to do it for the whole race you need to be a bit of an animal - with no brain!" 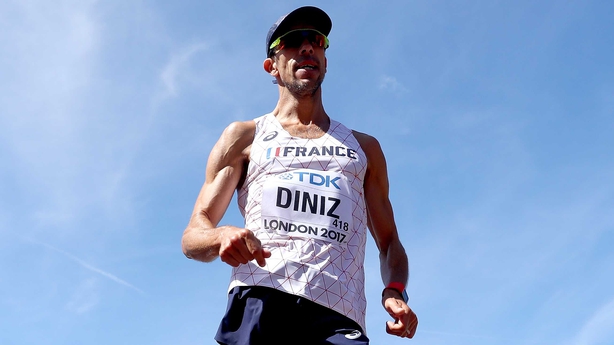 Diniz was so dominant en route to his long-awaited first global title that he lapped nearly all the 43-strong field over the 2km looped circuit on The Mall, finishing less than a minute adrift of his three-year-old world record of 3:32:33.

He was even able to take a swift comfort break when leading in the first 15 minutes before rejoining the race and destroying his opponents over the 25 laps between Admiralty Arch and Buckingham Palace.

His eight-minute gap over his two distant Japanese pursuers, silver medallist Hirooki Arai (3:41:17) and bronze medallist Kai Kobayashi (3:41:19), was by far the biggest ever recorded in the championships.

Belarussian Ellina Zvereva holds the overall record of being the oldest world champion, having won the women's discus in 2001 at the age of 40.

Robert Heffernan crossing the line in an excellent 8th pic.twitter.com/ZKQauJocUb

Wright had been going well early on but then had his shoe dislodged at 4km when someone stood on his heel. From there it was an uphill battle to get back up to the main group which saw him get the three warnings that resulted in his expulsion from the race..