World 50k walking champion Rob Heffernan has given an insight into the intense and intelligent training regime he hopes will lead to success at next month’s European Championships.

Heffernan will lead a highly promising Irish team in the Europeans in Zurich from 12-17 August.

Speaking from a training camp in the Sierra Nevada mountains, he gave RTÉ Sport some idea of the work involved ahead of such a major championships.

“I’ve been up here now nearly two months,” Heffernan said. “I’m literally staying in the mountains, a couple of ‘ks’ away from anywhere.

"You’re secluded, your whole day revolves around training and sleeping, and training and physio. And you’re just doing massive mileage, and the last week your intensity is up.

“It’s just the work that has to be done before a championship, so you can’t have any other distractions.”

"After winning the worlds, you nearly have to be more motivated than the year before to reproduce that form" - Rob Heffernan

Heffernan will return to Ireland on Friday, but there will be no let-up on the training, as he attempts to maximise the benefits of his time at altitude.

“On Friday I’ve eight by two kilometre reps at 20km pace, and then I’ll have another intense session after that,” he said.

“You kind of have to maximise your new aerobic and anaerobic capacity when you come down from altitude, so the intensity of the training goes up.”

Heffernan’s hunger for competition and racing was as evident as ever, and he was delighted with how his training has gone this year, especially following his World Championships win in Moscow last year.

“My training has gone as well if not better this year than other years,” he said.

“And I’m fully aware, after winning the worlds, you nearly have to be more motivated than the year before to reproduce that form.

At 36, Heffernan is mindful of the physical toll his training is taking on his body, and has adjusted his training accordingly. At the training camp, he has been resting for three to four hours during the day, he said, and gets physio every day.

“You’re constantly trying to recover,” he said. “If you don’t do that, and if you’ve any other distractions, [you’ll] end up getting sick.”

Heffernan contrasted his approach to training now with when he was younger, and had qualified for the World Championships in Paris in 2003. It's clear that his training is now focused on peaking at precisely the right moment.

He said: “I’m just a lot more professional about everything I do now; I’m a lot more organised,” he said. “When I have to rest, I rest. At the end of the season I take a proper break.

“I’m fully aware everything is for one day in August; so I periodise my year accordingly," said Heffernan.

"If you do it any other way, you’ll end of getting injured in January or February.

"You’ll only win small battles, when at the end of the day the championships, the worlds of the Europeans, or Olympics, they’re the main competitions of the year, so everything has to go towards that.” 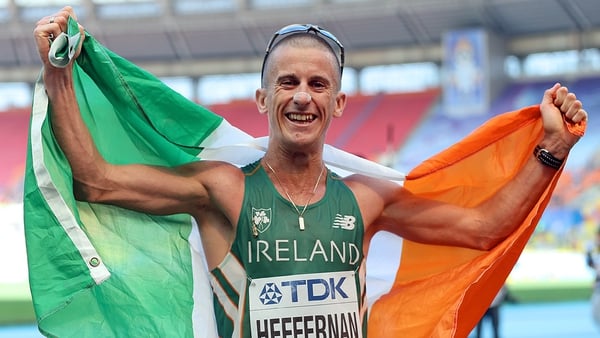