Ireland’s latest world champion Rob Heffernan has spoken of his delight at winning gold in Moscow and described it as “an out of body experience.”

The Cork man claimed victory in the 50km walk at the World Championships this morning.

Speaking to RTÉ Sport, he said: “It’s just a great feeling. When I came into the stadium it just felt like a an out-of-body experience.

“It’s hard to take it all in at the moment but I’m delighted. It’s a dream come true for me to win.”

Reflecting back on the London Olympics - where the Cork man finished fourth -  Heffernan said he wasn’t disappointed with his performance then but the experience did motivate him.

He said: “For the last 11 years I have been motivated and I have been challenging for medals and for some reason I hadn’t won one.

"My fourth place in London was a great performance, it just wasn’t a medal, still I did everything I could.

“I said earlier on in the year I wanted it to be a Rocky scenario, I wanted to go into Moscow and take on the Russians and that’s what I did so I’m very proud."

After an agonising fourth place in the same disciplines at the London 2012 Games, Heffernan brought in a new coaching team and felt he was better prepared for today then he was a year ago.

He said: “This year I had a better support team. When a lot of people take their foot of the gas, I was more conscious of training harder and I had to be more motivated.

“I was prepared mentally and I prepared very well. I went through every single kilometre beforehand tactically so it paid off."

While Ireland’s third gold medallist at a World Athetlics Championships didn't get carried away during any part of the race, he did admit when he entered the stadium, the realisation that he was going to win began to set in.

He said: “I didn’t get carried away for any part of the race, I was just working kilometre by kilometre and I tried not to get emotional about anything.

“It was only coming into the stadium [and] looking at myself on the big screen, I said ‘it looks good man’.

"I just rolled with it and I enjoyed the last lap to be honest."

While support from family and his children was a great encouragement, Heffernan said there was one person in particular he thought of as he crossed that finsh line.

He said: “When my mother passed away it was the saddest time of my life [but] you use that stuff for strength.

“When I was going through today and things were good, you have to appreciate the good times and you have to enjoy them." 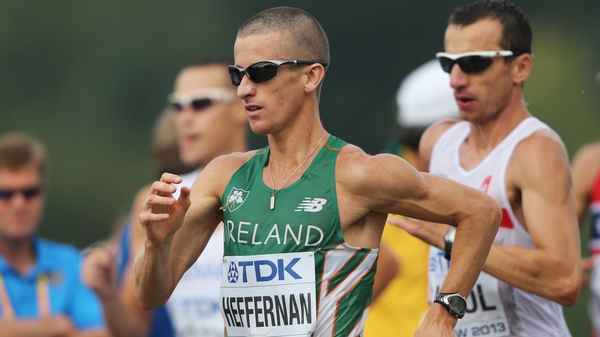