Colorado Springs officials have identified the five shooting victims who died and the two people who helped subdue the gunman who opened fire in an LGBTQ nightclub Saturday night, which killed five people and left 18 others wounded.

Police Chief Adrian Vasquez identified the dead as Kelly Loving, Daniel Aston, Derek Rump, Ashley Paugh and Raymond Green Vance, providing their preferred pronouns but no further details, while telling reporters their families did not want to be interviewed.

The two patrons who stopped the gunman were identified as Richard Fierro and Thomas James.

The suspected shooter, 22-year-old Anderson Lee Aldrich, was under arrest after police said he attacked Club Q, a nightclub which catered to lesbian, gay, bisexual, transgender and queer people in Colorado's second-largest city.

Police said they had yet to determine a motive for the shooting.

It is understood that Mr Aldrich is from Colorado, and he faces potential charges of murder and hate crime.

"If the evidence supports bias-motivated crimes, we will charge that as well," Mr Allen said. 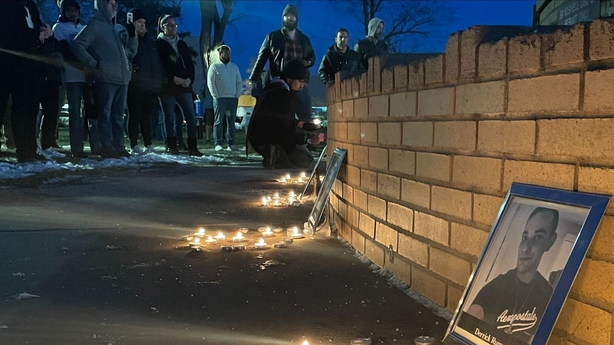 Mr Fierro is a US Army veteran and owner of the Atrevida Beer Co. in Colorado Springs, according to his wife, Jess Fierro.

Colorado Springs Mayor John Suthers said he had a chance to speak with Mr Fierro, who he said "saved a lot of lives".

"I have never encountered a person who had engaged in such heroic actions that was so humble about it. He simply said to me, 'I was trying to protect my family,'" Mr Suthers told the news conference.

Mr Vasquez said the suspect was armed with an "AR-style" rifle and a handgun.

The police chief condemned what he called an "evil act" and pledged to do everything he can to make the community feel safe again.

Mr Aldrich was arrested following the shooting and is currently being held without bond in hospital.

A man with the same name as Mr Aldrich was arrested on 18 June last year after his mother said he had threatened her with a homemade bomb, according to a news release at the time from the El Paso County Sheriff's Office.

Mr Vasquez, the police chief, said the suspect's mother was not cooperating with the authorities at this time.

"They saved my life'"

Bartender Michael Anderson praised the patrons who overpowered the gunman.

"There were some very brave people beating him and kicking him, stopping him from causing more damage," he said. "They saved my life."

Ms Fierro said that her daughter's boyfriend was killed in the shooting.

She said her husband injured his hands, knees and ankle while seizing a pistol from the shooter and hitting him with it to subdue him.

She said the scene was "absolute havoc" and "terrifying".

In an interview with The New York Times, Mr Fierro said he was at the club with his wife, daughter and friends watching a drag show when the gunfire began.

The 45-year-old said he tackled the gunman by grabbing a handle on the back of his body armor, and took his pistol to beat him with it.

"I don't know exactly what I did, I just went into combat mode," he said.

"I grabbed the gun out of his hand and just started hitting him in the head, over and over," he told the newspaper.

Last night, hundreds of people gathered in a Colorado Springs park for a candlelit vigil paying respect to those who were murdered.

Speakers praised the resilience of the LGBTQ community in the Rocky Mountain city and many spoke about how they had found the loving support they needed to become comfortable with their identity through the tight-knit LGBTQ community in Colorado Springs, and particularly at Club Q.

"We need to stop the political agenda against the LGBTQ community," burlesque performer Bunny Bee told the crowd.

Fellow performer Jimmy Gomez-Beisch said the intolerance had to end.

Allie Porter, who paid a tearful tribute from the stage to those killed, said she had felt the warm embrace of the local community for the 30 years she had lived in the city.

"We'll keep going the same way as we always have. We've dealt with this for years, decades, and we've consistently rebuilt," she said.

The attack was the deadliest on the LGBTQ community in the US since a 2016 mass shooting at a nightclub in Orlando, Florida that claimed 49 lives.

"When politicians and pundits keep perpetuating tropes, insults, and misinformation about the trans and LGBTQ+ community, this is a result," Ms Titone tweeted.

Transgender rights were a key topic issue in the US leading up to midterm elections earlier this month, with Republicans putting forward a slew of legislative proposals to restrict them.

President Joe Biden condemned the attack and spoke to Colorado Governor Jared Polis yesterday, who in 2018 became the first openly gay man elected as a US state governor.

"We must drive out the inequities that contribute to violence against LGBTQI+ people," Mr Biden said.

"We cannot and must not tolerate hate."

GLAAD, an LGBTQ advocacy organisation, noted that the attack came on the eve of the Transgender Day of Remembrance, which honours victims of transphobic attacks, and amid an uptick in hostility against the LGBTQ community in the US.

"You can draw a straight line from the false and vile rhetoric about LGBTQ people spread by extremists and amplified across social media, to the nearly 300 anti-LGBTQ bills introduced this year, to the dozens of attacks on our community like this one," GLAAD president Sarah Kate Ellis said in a statement.