British Prime Minister Liz Truss said she would make the "difficult but necessary" choices to get economic growth, in her first leader's speech at the Conservative Party conference.

Ms Truss promised to steer the country through the "tempest" and "get Britain moving".

Greenpeace protesters holding a flag which read "who voted for this?" were ejected from the hall after disrupting the speech, with Ms Truss ordering security officers to "get them removed".

Environmental campaigners were identified by Ms Truss as "enemies of enterprise" as part of an "anti-growth coalition" including opposition parties, trade unions and "Brexit-deniers".

In 1st Conservative Party speech as British Prime Minister @trussliz spoke for 35 mins + mentioned lots of issues - economy, energy, investment, taxes and getting rid of EU red tape, but not a single mention of Northern Ireland Protocol or her Govt's current position @rtenews

The interruption to her speech in Birmingham followed a bruising conference for Ms Truss after just a month in the job, including a U-turn over a totemic tax policy and dissent within her cabinet.

Despite the decision to ditch plans to scrap the 45p top rate of tax, Ms Truss insisted: "We must stay the course" in pursuit of her three priorities: "Growth, growth and growth."

She told the audience: "This mission will be difficult but necessary. We have no alternative if we want to get our economy growing again.

"I am ready to make hard choices. You can trust me to do what it takes.

"The status quo is not an option. That is why we cannot give into the voices of decline." 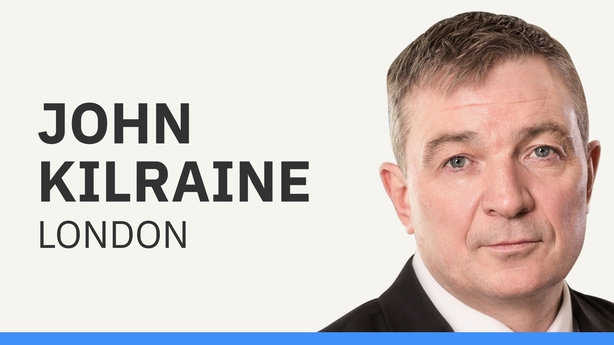 Liz Truss delivered a strong defence of her low tax policy in her address as party leader this morning.

Speaking of the U-turn on tax breaks for high earners, she said that had become a distraction and added: "We get it. We listened."

Ms Truss did not address the question of whether benefits will rise with inflation, something that has divided senior Tories in recent days. But she reaffirmed her commitment to low taxes, saying this will encourage growth which will benefit everyone.

She also criticised what she called the "anti-growth coalition" of Labour, the Liberal Democrats and the SNP.

Ms Truss said as a nation Britain had become averse to doing things differently but promised to speed up infrastructure projects and house-building while cutting red tape.

She received standing ovations but some rows remained seated during her speech and there were empty seats in the hall as some Conservatives stayed away.

Setting out her vision, she said: "Growth means more money in people's pockets and for businesses creating jobs.

"Growth means people can feel secure and plan for their future. Fundamentally, it enables people to fulfil their hopes and dreams."

In a sign of support for Kwasi Kwarteng following the humiliation of the 45p U-turn, Ms Truss said she was "in lockstep" with her "dynamic" chancellor.

She said: "Cutting taxes is the right thing to do morally and economically.

"Morally, because the state does not spend its own money. It spends the people's.

"Economically, because if people keep more of their own money, they are inspired to do more of what they do best."

A low tax economy was a sign that "Britain is open for business", she said.

But in an attempt to calm markets which had been spooked by Mr Kwarteng's mini-budget, Ms Truss promised to "keep an iron grip on the nation's finances".

"I believe in sound money and the lean state," she said.

"I remember my shock opening my first pay cheque to see how much money the taxman had taken out. I know this feeling is replicated across the country.

"That is why we must always be careful with taxpayers' money."

Rising interest rates risk causing misery for homeowners, but Ms Truss stressed the independence of the Bank of England over that.

But she said "the chancellor and the governor will keep closely co-ordinating our monetary and fiscal policy".

She also promised reforms to slash red tape, promising: "Now is the time to harness the power of free enterprise to transform our country and ensure our best days lie ahead."

In a message to the public, she said "we have your back" and she was working "flat out to ensure people can get through this crisis".

She said the death of Queen Elizabeth II and the succession of King Charles heralded a "new era", but warned: "These are stormy days."

"In these tough times, we need to step up. I’m determined to get Britain moving, to get us through the tempest and put us on a stronger footing as a nation."

But in a sign of the difficulties she faces, shortly ahead of her speech YouGov released polling suggesting Ms Truss is already more unpopular than her predecessor Boris Johnson or former Labour leader Jeremy Corbyn ever were.

Just 14% of the public now say they have a favourable impression of the prime minister compared with 26% who said so between 21-22 September.

Nearly three-quarters, 73%, now see the prime minister in an unfavourable light, including more than half, 55%, who see her very unfavourably.