The ruptures on the Nord Stream natural gas pipeline system under the Baltic Sea has led to what is likely the biggest single release of climate-damaging methane ever recorded, the United Nations Environment Programme has said.

A huge plume of highly concentrated methane, a greenhouse gas far more potent but shorter-lived than carbon dioxide, was detected in an analysis this week of satellite imagery by researchers associated with UNEP's International Methane Emissions Observatory, or IMEO, the organisation said.

"This is really bad, most likely the largest emission event ever detected," Manfredi Caltagirone, acting head of the IMEO for UNEP, said. "This is not helpful in a moment when we absolutely need to reduce emissions," he said.

Researchers have not yet been able to quantify from the imagery the amount of methane leaking from the Gazprom-led pipeline system, but believe the rate of emissions is higher than from a major leak that occurred in December from offshore oil and gas fields in Mexican waters of the Gulf of Mexico, which spilled around 100 metric tons of methane per hour, Mr Caltagirone said. 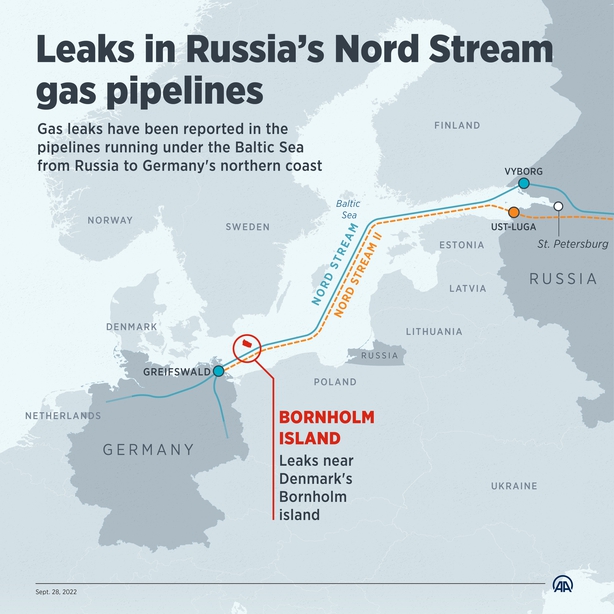 The Gulf of Mexico leak, also viewable from space, ultimately released around 40,000 metric tons of methane over 17 days, according to a study conducted by the Polytechnic University of Valencia and published in the journal Environmental Science & Technology Letters.

That is the equivalent of burning 1.1 billion pounds of coal, according to the US Environmental Protection Agency's Greenhouse Gas Equivalencies Calculator.

Improved satellite technology has rapidly enhanced the ability of scientists to find and analyze greenhouse gas emissions in recent years, something some governments hope will help companies detect and prevent methane emissions.

The major leaks that suddenly erupted in the Nord Stream gas pipelines that run from Russia to Europe have generated plenty of theories but few clear answers about who or what caused the damage. Both Russia and the European Union have suggested the ruptures were caused by saboteurs.

Europe and the United States have heaped sanctions on Moscow in retaliation for its invasion of Ukraine, raising worries the Kremlin will seek to deprive Europe of crucial energy supplies leading into the winter.

Mr Caltagirone said, whatever the cause, the damage to the pipeline posed a problem beyond energy security. "This is the most wasteful way to generate emissions," he said.

Sweden's coastguard has said that one of the four leaks on the Nord Stream pipelines had diminished in size.

The leak, which is located above Nord Stream 2, "has diminished, but is still ongoing," the Swedish Coast Guard said in a statement this morning.

Two of the leaks are located in the Swedish exclusive economic zone, and the two others in the Danish one.

The other leak on the Swedish side, which is larger and located above Nord Stream 1, showed no signs of weakening, according to the coast guard.

Denmark on Wednesday estimated that more than half of the gas in the two pipelines - which were not in operation but filled with gas - had escaped and the pipes were expected to be empty by Sunday.

According to a simulation released this morning by the Norwegian research institute NILU, the methane released has been moving with the wind over several Swedish and Norwegian regions since Monday, even reaching the UK.

Russia's spy chief has blamed the West for what he said was the "terrorist act" of wrecking the subsea Nord Stream pipelines. 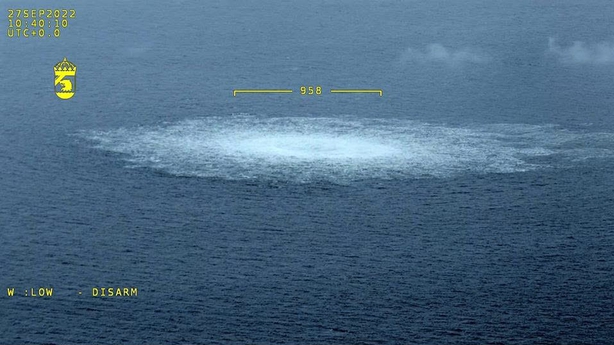 Sergei Naryshkin, the director of Russia's Foreign Intelligence Service (SVR), said the West was trying to cover up who carried out an attack on the gas pipelines under the Baltic Sea, while the Kremlin demanded an international probe.

"The West is doing everything to hide the true perpetrators and organisers of this international terrorist act," Mr Naryshkin said.

The Russian accusation, the most direct to date by a Russian official, is likely to be strongly resisted by European countries. The United States, which has said it was too early to confirm it was sabotage, has dismissed talk it was responsible.

The pipeline incident has prompted European countries to step up vigilance over other critical infrastructure, which looks suddenly much more vulnerable.

There is also heightened focus on the Baltic Pipe, a project that was unveiled this week. A rival to the Nord Stream network, the Baltic Pipe will transport gas to the Danish and Polish markets and end-users in neighbouring countries from tomorrow.

Norway, a major Russian rival on gas supplies, will deploy its military to protect oil and gas installations against possible sabotage after warnings of unidentified drone sightings last month.

With no gas flowing through Nord Stream for the foreseeable future, European countries are racing to secure more energy supplies and trying to cushion households from an explosion in prices since last year.