At least 10 people died and four were missing after heavy rain sparked major flooding in central Italy, pushing the issue of climate change up the agenda the week before elections.

Prime Minister Mario Draghi confirmed the death toll before heading to the town of Ostra near Ancona, one of the places worst hit when more than 400 millimetres (16 inches) of rain fell over a few hours last evening. 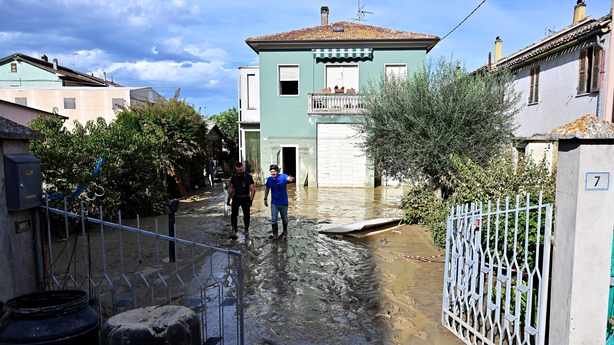 "It was scary because it happened so fast. It sounded like a waterfall," said Laura Marinelli, 33, who grabbed her 18-month-old daughter and ran to neighbours upstairs as her ground-floor home near Ostra began to flood.

The waters kept rising and they climbed onto the roof to call for help.

"We've lost everything, all the photos, all the letters you can't replace," she said, plastic pink toys floating in the submerged garden nearby.

The AGI news agency earlier reported that a child was among the missing, after being washed away from their mother.

Across the area around Ancona, the port capital of the central eastern Marche region, streets were turned into rivers, cars swept into piles by the floodwaters, furniture washed out of homes and thick mud left everywhere.

The fire service said it had 300 people working on the floods, while several areas were without electricity or telephone connections, and schools were closed.

At a pre-planned press conference in Rome, Mr Draghi announced €5 million in emergency funds for the area, and offered his "deep condolences" for the victims.

"At the moment we are counting 10 dead and four disappeared, but unfortunately the situation is evolving," he said.

Mr Draghi made an explicit link between the flooding and global warming, saying: "We see it concretely in what happened today how the fight against climate change is fundamental."

The tragedy occurs just days before 25 September general elections, and condolences for those affected poured in from across the political spectrum.

Frontrunner Giorgia Meloni, the leader of the far-right Brothers of Italy party who polls show could be the next prime minister, offered "full solidarity" with those affected.

Italy has been hit by severe drought this year, followed by violent end-of-summer storms, and many have drawn the link with climate change - a subject which had taken a back seat during the election campaign.

"How can you think that the fight against climate change is not the first priority?" said Enrico Letta, head of the centre-left Democratic Party.

He said he was "stunned and speechless" at the news and announced he was suspending campaigning in Marche.

Francesco Rocca, president of the International Federation of the Red Cross and Red Crescent Societies, said its teams were heading to help.

"Very concerned by the growth of extreme weather events," he said on Twitter.

All our @ifrc solidarity to the people hit by heavy rains and floods in the central Italian region of #Marche.

Italian #RedCross @crocerossa teams have been immediately deployed to save lives & help their local communities.

Very concerned by the growth of extreme weather events pic.twitter.com/sh7lDZSFhz

The baking heat has in recent weeks been followed by storms, the water flooding land rendered hard as concrete.

In July, 11 people were killed when a section of Italy's biggest Alpine glacier gave way, in a disaster officials blamed on climate change.

The EU's economy commissioner, Paolo Gentiloni, a former Italian premier, said he shed tears for the victims of the floods in Marche.

"Italy and Europe must take climate change seriously," he tweeted.

Maurizio Greci, mayor of the town of Sassoferrato near Ancona, said that aside from a general weather warning, there was nothing to suggest "a disaster of this magnitude".

"This is something that has never happened in living memory in this area," he told Radio Capital, while adding that most of the damage in his town was to property.

The Italian Air Force, which deals with weather, said there had been an "exceptional" weather event, with more than 400mm of rain falling between mid-afternoon and 11pm.

More than half of this fell within four hours, spokesman Guido Guidi said, adding: "It was not a foreseeable event."