Indian authorities have demolished two illegally constructed skyscrapers in a wide plume of dust debris near the capital New Delhi, razing the tallest structures ever pulled down in the country in less than ten seconds.

Crowds watching the collapse from rooftops on nearby high-rise buildings cheered and clapped as the 103-metre tall towers collapsed from a controlled demolition and the dust enveloped the residential area.

The Supreme Court last year ordered the demolition of the towers in the Noida area after a long legal battle found they violated multiple building regulations and fire safety standards.

Over 3,700kg of explosives were used around 2:30pm (10am Irish time), officials told local media.

Strategically placed explosives were meant to ensure minimal damage to the area.

Police said they were assessing whether any damage had occurred.

Nearby residents said they would check whether their properties had been damaged.

Such demolitions are rare in India despite rampant illegal construction. 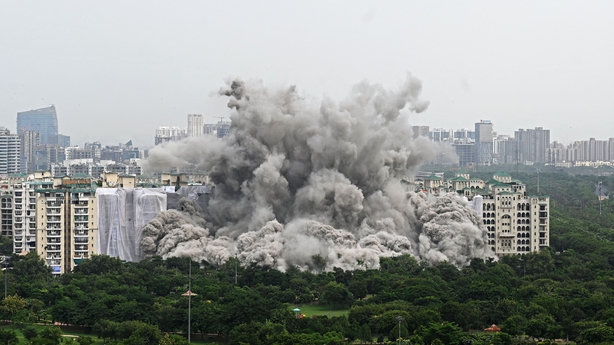 Thousands had vacated their apartments near the blast site for about ten hours, and scores of police and emergency personnel were deployed for the demolition of the towers containing 850 unoccupied apartments.

Traffic was being slowly restored and firefighters were using water sprinklers to bring the dust levels down around the Apex and Ceyane towers.

They had stood on the edge of a busy highway linking India's most populous state, Uttar Pradesh, to the capital.

Some buildings in the vicinity were covered in white plastic sheets to protect them from debris. 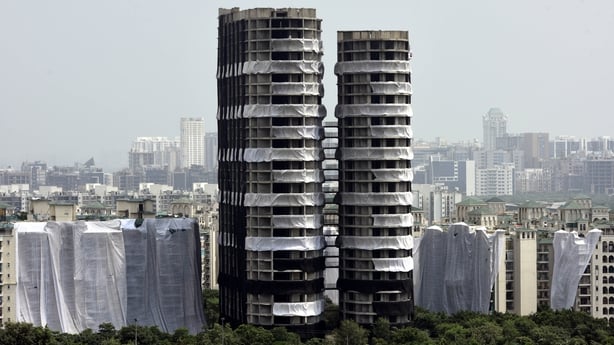 On Twitter, many people said the decision to blow up the towers was a strict action against corruption and would serve as an example and warning for builders and construction companies.

The blast was expected to leave over 80,000 tonnes of rubble, most to be used to fill the site and the rest to be recycled.

Sudeep Roy, owner of a four-room apartment in a nearby low-rise building, said he booked hotel rooms last week to spend the night with family and friends.

"It is best to stay away from the blast site for 24 hours because the air will get toxic and we don't know how it can impact our health," said Mr Roy, a mechanical engineer and father of twin boys, one of whom suffers from asthma.

Indian authorities have demolished two illegally constructed skyscrapers in a wide plume of dust debris near the capital New Delhi, razing the tallest structures ever pulled down in the country in less than ten seconds | More: https://t.co/Mg43dWXT2H pic.twitter.com/33Svelm50y