A Moscow court today ordered journalist Marina Ovsyannikova, who denounced Russia's intervention in Ukraine during a live TV broadcast, to pay a fine for discrediting the Russian army.

Moscow's Meshchansky district court said that Ms Ovsyannikova, a former editor at state-controlled Channel One, should pay a fine of 50,000 rubles (around €800), an AFP journalist said from court.

Her lawyer Dmitry Zakhvatov said she was fined for speaking out against Moscow's intervention in Ukraine earlier this month when she turned up at Moscow's Basmanny district court to support city councillor Ilya Yashin.

In mid-July, Ms Yashin, one of the last prominent opposition figures still in Russia, was placed in pre-trial detention for two months for having denounced Moscow's Ukraine offensive.

Ovsyannikova, a 44-year-old mother of two, was briefly detained earlier this month.

Her brief detention came several days after she demonstrated alone near the Kremlin, holding up a sign criticising the military intervention in Ukraine and President Vladimir Putin. 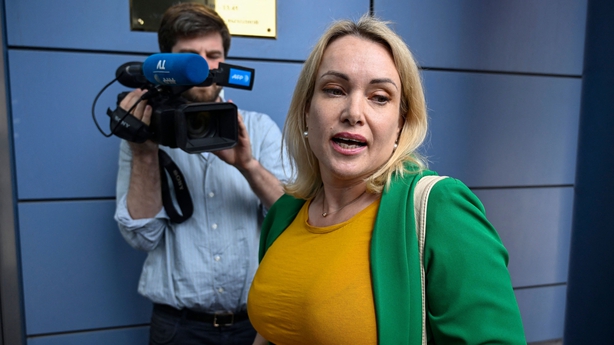 Zakhvatov said the journalist was now in Russia and had no immediate plans to leave.

In March, Ms Ovsyannikova shot to prominence for interrupting a live TV broadcast to denounce Russia's military intervention in Ukraine.

After sending troops to Ukraine, Moscow adopted laws imposing sentences of up to 15 years in prison for spreading information about the military deemed false by the authorities.

Russian authorities have not announced the opening of any criminal investigation against Ovsyannikova.

In early July, she announced that she was returning to Russia to settle a dispute over the custody of her two children.