Three people, including the suspected gunman, have been killed in a series of shootings in the Canadian province of British Columbia, police have said.

Authorities had earlier issued an emergency alert for multiple shootings in the city of Langley involving homeless people and had asked residents to stay away from the area.

"We are actively investigating a series of shootings that has left two dead, one in critical condition and another with serious injuries," said Chief Superintendent Ghalib Bhayani of the regional Royal Canadian Mountain Police force.

"At this time, we don't know the motive behind this deadly incident, nor if there was any relationship between the deceased suspect and the victims."

A witness saw two black SUVs, similar to those used by police emergency response teams, in a ditch near one of the shooting sites. One vehicle had bullet holes in the windshield.

Police in Langley, a suburb of Vancouver, said they responded to "multiple reports of shots fired with several victims and several different scenes throughout the City of Langley, and one scene in the Township of Langley" and asked the public to remain out of several areas, including the parking lot of a casino and a bus stop.

In an alert sent to BC residents' phones, police said the shootings involved "transient victims," or homeless people.

The alert said the suspect was described as a white man in overalls and a camouflage t-shirt.

"During their interaction with the suspect, police fired their weapon, hitting the man. He was pronounced dead at the scene," police said in a statement. 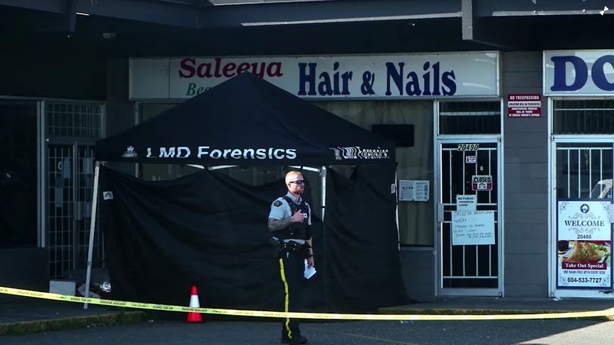 Multiple shootings are much less common in Canada than in neighbouring United States.

Canada has stricter gun laws than its southern neighbour, though Canadians are allowed to own firearms as long as they have a licence.

One of Canada's worst mass shootings took place in 2020, when a gunman driving a fake police car shot 13 people and killed another nine in a fire he set alight in Portapique, Nova Scotia.

While Canada's gun homicide rate is less than one-fifth the US rate, it is higher than that of other developed countries and has been rising, according to Statistics Canada.

Canada banned the sale and use of some 1,500 models of assault weapons, like the AR-15 rifle, two years ago in the wake of the Nova Scotia shooting, a move some firearms owners say they are contesting in court.

In May, Ottawa introduced legislation to implement a "national freeze" on the sale and purchase of handguns a week after a gunman killed 19 children and two teachers in their classroom in Uvalde, Texas.