Hundreds of tourists and residents were evacuated on Saturday from a popular resort on the Greek island of Lesbos as a wildfire destroyed homes in the beachside village of Vatera.

The fires sent up thick clouds of smoke blotting out the sun as they drifted over the sea as blazes raged metres away from homes, forcing people to flee while others tried to protect their houses from the embers.

Greece was facing the first day of a heatwave on Saturday that is expected to last 10 days. Temperatures were set to rise to 42 degrees Celsius in some regions, sparking concerns over more wildfires.

The fire on Lesbos island broke out at 10am local time on Saturday and is blazing on two fronts, heading towards Vrisa village and another inside Vatera.

Police said 450 people were evacuated from two hotels and 92 houses in Vatera.

The Greek coast guard said earlier it evacuated nine people including five foreigners from a beach in Vatera.

Firefighters deployed seven firefighting planes and a helicopter to fight the surging blaze.

West Lesbos mayor Taxiarchis Verros ordered the evacuation of the busy beach resort as a precautionary measure, acting on the advice of the fire brigade, Athens News Agency reported.

At least two houses were ravaged by the fire, state TV ERT said. 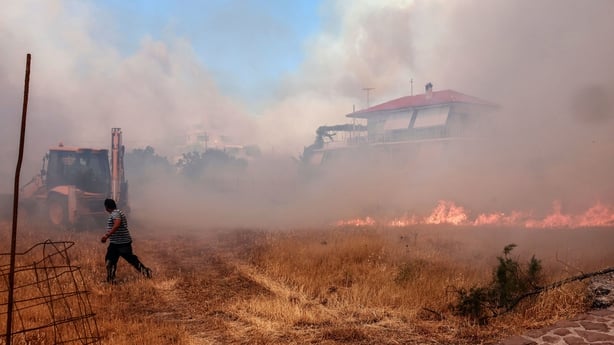 On Saturday, for a third day firefighters were tackling a wildfire raging in the Dadia National Park, known for its black vulture colony, in the northeastern region of Evros.

According to ERT TV, the fire was approaching the village of Dadia by late Saturday afternoon.

Some 320 firefighters and 68 fire engines have been battling the fires in Evros, alongside a large number of volunteers.

However, their efforts were hampered by the dense smoke and lack of wind, combined with high humidity during the night, which hindered the effort to fight the fire from the air.

A wildfire in mountains near Athens on Wednesday damaged homes and forced hundreds of people to evacuate after gale-force winds earlier this week. 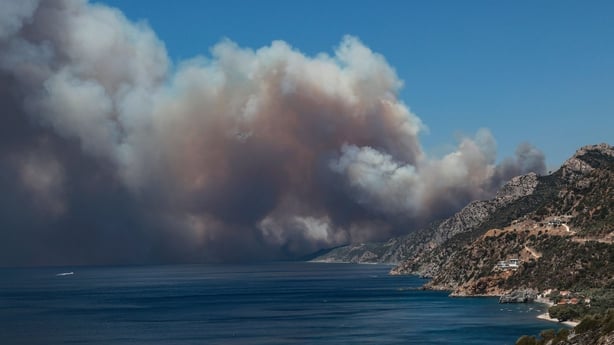 In the Peloponnese, a fire that broke out near Koroni Saturday morning sparked an evacuation of the Akritochori village early evening.

The country's worst wildfire disaster was in the coastal suburb of Mati, claiming 102 lives in 2018, close to the area affected by Wednesday's blaze.

On Saturday, a memorial service was held at the seaside town to commemorate the victims.

Fires in parts of France, Spain and Portugal have already burned more land so far this year than was destroyed by flames in all of 2021.

The area, some 517,881 hectares, is equivalent to the size of Trinidad and Tobago.