All eight crew members of a cargo plane that crashed near the Greek city of Kavala died in the accident, Serbia's defence minister has said.

The Ukrainian-operated Antonov An-12 was carrying around 11 tonnes of weapons as well as mines to Bangladesh when it crashed late last night, Nebojsa Stefanovic said.

Videos shared by eyewitnesses on social media showed the plane engulfed by a giant fireball as it hit the ground.

"Sadly, according to the information we have received, the eight members of the crew died in the crash," Mr Stefanovic told a news conference.

He gave no information about the cargo.

The plane had taken off from Nis airport in Serbia at around 8.40pm on Saturday, carrying weapons owned by private Serbian company Valir, Mr Stefanovic said.

Greek media said it had requested clearance to make an emergency landing at Kavala airport but had not managed to reach it. 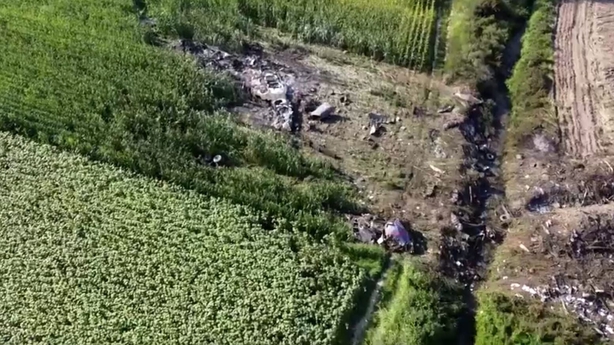 Greek rescue services were using a drone today to monitor the wreckage of the aircraft as fears about the toxicity of the cargo were forcing them to keep at a distance.

Villagers were forbidden to go into the fields near the crash until the authorities could remove the wreckage and unexploded ammunition.

Athens News Agency said he had given the authorities the identities of the eight crew and confirmed the plane had been flying to Bangladesh.

Serbia's defence minister said the weapons shipment had been agreed with the Bangladeshi defence ministry "in accordance with international rules".

"Unfortunately some media have speculated that that the plane was carrying weapons destined for Ukraine but that is completely untrue," he said.

State-run TV said the army, explosives experts and Greek Atomic Energy Commission staff would approach the crash site once it was deemed secure.

"Men from the fire service with special equipment and measuring instruments approached the point of impact of the aircraft and had a close look at the fuselage and other parts scattered in the fields," fire brigade official Marios Apostolidis told reporters.

Search teams would go in when it was safe, he added.

A 13-strong special team from the fire brigade, 26 firemen and seven fire engines were deployed to the area but could not yet approach the crash site, local officials said.

Video footage from a local channel showed signs of impact in a field and the aircraft in pieces scattered over a wide area.

Eyewitnesses said last night they saw the aircraft on fire and heard explosions.

People living within a two-kilometre radius of the crash site were asked to stay inside and wear face masks last night.

Two firemen were taken to hospital early this morning with breathing difficulties because of toxic fumes.

A local man, Giorgos Archontopoulos, told state broadcaster ERT television he sensed something was wrong as soon as he heard the aircraft's engine.

"At 10.45pm I was surprised by the sound of the engine of the aircraft," he said. "I went outside and saw the engine on fire."

Athens News Agency said an investigation would be launched into the cause of the accident.