US President Joe Biden has arrived in Brussels for a series of summit meetings on the situation in Ukraine, while NATO's chief has said the alliance is to bolster battle groups in Eastern Europe.

It comes as Russian forces have bombed further areas of the Ukrainian capital Kyiv today.

NATO, G7 and EU summits will on Thursday discuss the conflict, which began on 24 February, and has caused more than 3.6 million refugees to flee the country and already led to the unprecedented isolation of Russia's economy.

The Taoiseach will also attend the EU summit, having received two successive negative Covid-19 tests ahead of his departure from the US. Micheál Martin is said to be feeling well, symptom-free, and will be wearing a mask, as per the advice, while in Brussels.

Before reaching this decision, the Department of the Taoiseach consulted with Aer Lingus and the public health authorities.

Responding to a slew of sanctions that have already frozen assets and hit individuals and firms, President Vladimir Putin said Moscow planned to switch gas sales made to "unfriendly" countries to roubles, alarming international markets.

Mr Biden's visit could also shine light on a dispute with European allies, some of whom are heavily reliant on Russian oil and gas, over whether to impose further energy sanctions.

The issue has been a "substantial" topic and the subject of "intense back and forth" in recent days, White House national security adviser Jake Sullivan told reporters.

The US plans to announce more sanctions on political figures and oligarchs, he said.

Mr Biden will start his visit by meeting NATO Secretary-General Jens Stoltenberg, who has said the alliance will boost its forces in Eastern Europe by deploying four new battle groups - in Bulgaria, Hungary, Romania, Slovakia. 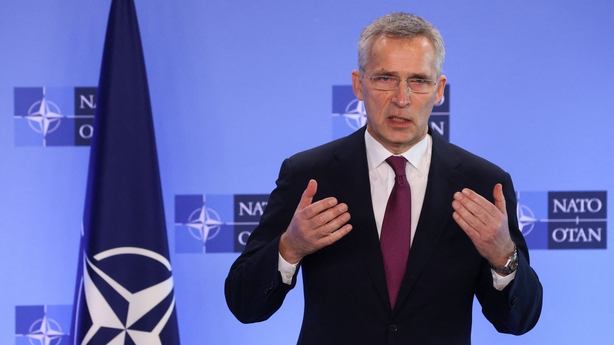 "I expect leaders will agree to strengthen NATO's posture in all domains," he said.

Moscow calls its actions in Ukraine a "special operation" that it says is not designed to occupy territory but to destroy its southern neighbour's military capabilities.

The West says this a baseless pretext for an unprovoked war.

And in a sign of disquiet at home, a veteran aide to Putin, Anatoly Chubais, resigned over the war and has left Russia with no intention to return, two sources said. He becomes the first senior official to break with the Kremlin since the incursion.

Although the Kremlin says its operation is going to plan, Russian forces have taken heavy losses, got stuck on most fronts and face supply problems. They have turned to siege tactics and bombardments, causing huge destruction and many civilian deaths.

Kyiv's mayor, Vitali Klitschko, told reporters that 264 civilians in the city had been killed by Russian attacks. He later said that one person was killed and two wounded on Wednesday when shells hit a shopping centre parking lot in a northern part of Kyiv. 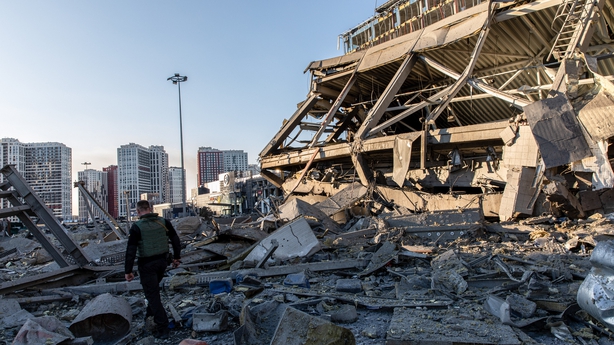 Ukrainian President Volodymyr Zelensky has called on people all over the world to take to the streets on Thursday, four weeks since Russia invaded, to demand an end to the war.

"Come from your offices, your homes, your schools and universities, come in the name of peace, come with Ukrainian symbols to support Ukraine, to support freedom, to support life," he said in an English-language video address.

US Secretary of State Antony Blinken said the United States has assessed that members of Russia's forces have committed war crimes in Ukraine.

Mr Blinken said there had been "numerous credible reports of indiscriminate attacks and attacks deliberately targeting civilians, as well as other atrocities", specifying attacks in the besieged southeastern city of Mariupol.

As Western leaders prepared to meet, British Prime Minister Boris Johnson said he would push for an increase in defensive lethal aid to Ukraine.

The first US shipment from a new, $800 million arms package for Ukraine authorised last week will start flying out in the next day or so, a senior defence official said.

Putin's announcement that Russia would switch certain gas sales to roubles sent European futures soaring on concerns the switch would exacerbate an energy crunch and jam up deals that run to hundreds of millions of dollars every day. 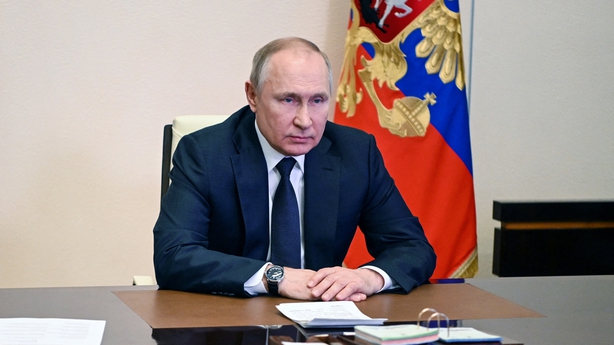 Russian gas accounts for some 40% of Europe's total gas consumption.

Moscow has drawn up a list of "unfriendly" countries which corresponds to those that imposed sanctions. They include the United States, European Union members, Britain and Japan, among others.

"The changes will only affect the currency of payment, which will be changed to Russian roubles," said Putin.

And as an information battle also rages, a Russian regulator has blocked Alphabet's news aggregator Google News, saying it allows access to what it calls fake material about the military operation, Interfax news agency said.

Earlier the company said it will not help websites, apps and YouTube channels sell ads alongside content that it deems exploits, dismisses or condones the conflict.

The war has driven a quarter of Ukraine's 44 million people from their homes, according to United Nations agencies.

A total of 4,554 people were evacuated from Ukrainian cities through humanitarian corridors today, a senior official said, considerably fewer than managed to escape the previous day.

Worst hit has been Mariupol, where hundreds of thousands of people have been sheltering since the war's early days, under constant bombardment and with food, water and heating supplies cut.

Satellite photographs from commercial firm Maxar showed massive destruction of what was once a city of 400,000 people, with columns of smoke rising from residential apartment buildings in flames.

While Russia was pressing hard in the south and east, British military intelligence said the entire battlefield across northern Ukraine - which includes armoured columns that once threatened Kyiv - was now static. 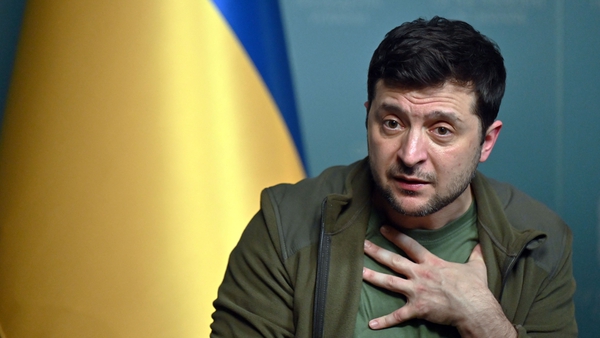 Ukrainian president to address Houses of the Oireachtas on 6 April