The first convoy carrying civilians from Sumy in northern Ukraine has arrived via a humanitarian corridor in the central city of Poltava, Ukraine's presidency has said, while an earlier effort to evacuate civilians from the besieged port city of Mariupol failed.

"The first column of 22 buses has already arrived in Poltava," the president's deputy chief of staff Kyrylo Tymoshenko said on Telegram, adding that 1,100 foreign students would travel onwards by train to Lviv in Western Ukraine.

Buses left Sumy for Poltava further west only hours after a Russian air strike which regional officials said had hit a residential area and killed 21 people.

Russia said 723 people had been evacuated via that corridor, including 576 Indian nationals. Residents were also leaving Irpin, a frontline Kyiv suburb.

Ukraine's government has accused Russian forces of shelling a separate humanitarian corridor that Moscow had promised to open to let residents flee the city of Mariupol in the south. The humanitarian situation there was catastrophic, the deputy prime minister said.

The civilian death toll in the conflict has mounted, and with the war in its 13th day, the number of refugees who have fled Ukraine to neighbouring countries has surged past two million.

In Mariupol, hundreds of thousands of people have been sheltering under bombardment for more than a week. Many tried to leave today along a safe corridor but Ukraine's foreign ministry said Russian forces violated a ceasefire and shelled it.

Deputy Prime Minister Iryna Vereshchuk said in a briefing that humanitarian corridors from Mariupol offered by Russia that lead to Russian or Belarusian territory were unacceptable.

"The situation in Mariupol is apocalyptic," he said.

The corridors to let civilians escape and allow aid reach besieged areas have been the main subject of talks between Russian and Ukrainian delegations.

The United Nations human rights office said it had verified 1,335 civilian casualties in Ukraine, including 474 killed and 861 injured, since the invasion began on 24 February.

Moscow denies targeting civilians. It describes its actions as a "special operation" to disarm Ukraine and unseat leaders it calls neo-Nazis. Ukraine and its Western allies call this a baseless pretext to invade a country of 44 million people.

Western countries say Russia's initial battle plan for a rapid strike to topple Ukraine's government failed early in the war, and Moscow has adjusted tactics for longer sieges of cities.

"The tempo of the enemy's advance has slowed considerably, and in certain directions where they were advancing it has practically stopped," Ukrainian presidential adviser Oleksiy Arestovych told a briefing.

The main Russian assault force heading towards Kyiv has been stuck on a road north of the capital. But to the south, Russia has made more progress along the Black and Azov Sea coasts.

In a sign of the risk that the war could expand, Poland said it was ready to deploy all its MIG-29 jets to Rammstein Air Base in Germany and put them at the disposal of the United States. Mr Zelensky had on Saturday appealed to NATO countries to transfer war planes to Ukraine.

Within Russia, the war has led to a severe new crackdown on dissent, with the last remaining independent media largely shut last week and foreign broadcasters banned.

Russian police arrested at least 100 protesters against the invasion of Ukraine this afternoon, the OVD-Info monitoring group said.

Meanwhile, US President Joe Biden banned Russian oil and other energy imports to the United States, piling pressure on Vladimir Putin to halt his devastating assault on Ukraine.

"Russia may continue to grind out its advance at a horrible price, but this much is already clear: Ukraine will never be a victory for Putin," Mr Biden told reporters at the White House.

He said his people would fight to the end against the Russian invaders but it needed help, including no-fly zones.

"The question for us now is to be or not to be," said Mr Zelensky, quoting Shakespeare. "I can give you a definitive answer: it's definitely to be."

MPs gave him a standing ovation, although at least one said later that a no-fly zone was out of the question as it could lead to a wider European war.

Western sanctions imposed over the invasion have already cut Russia off from global trade and financial markets. Russia is the world's biggest exporter of oil and natural gas but until now these exports were exempt from international sanctions.

Announcing the US ban, Mr Biden said: "That means Russian oil will no longer be acceptable in US ports, and the American people will deal another powerful blow to Putin's war machine."

The United States is not a leading buyer of Russian oil but Mr Biden has worked with allies in Europe, who are far more reliant on it, to isolate Russia's energy-heavy economy.

Vyacheslav Volodin, chairman of Russia's State Duma lower house of parliament, said the measures would hurt Europe while helping the United States. "By promoting sanctions against Russian energy resources, Washington is seeking to occupy the European market," he said in an online post.

Britain said it would also phase out the import of Russian oil and oil products by the end of 2022. The EU published plans to cut its reliance on Russian gas by two thirds this year.

In a move that epitomised Russia's deepening ostracization, McDonalds - a symbol of post-Cold War globalisation - said it would temporarily close its restaurants there. 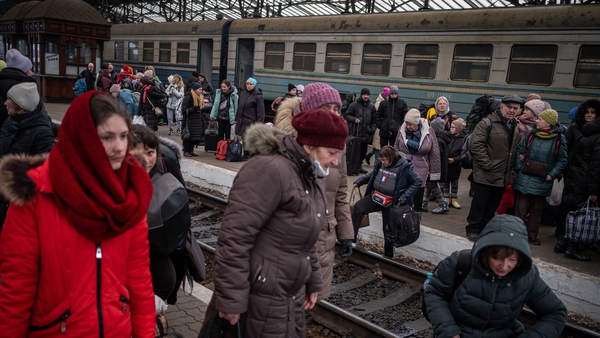 Information on Ukrainian refugees will be shared with UK: Ryan