A "Freedom Convoy" of trucks joined by thousands of demonstrators brought Ottawa to a virtual standstill for a second day yesterday to protest Canada's vaccine mandates, as other sympathetic truckers blocked a border highway into the United States.

The chaos clogged the capital's downtown near parliament throughout the weekend and brought criticism from officials including Ottawa's mayor.

"This afternoon, a large presence of police continues throughout the downtown core and the movement of protesters and trucks continues to be managed," the Ottawa police said in a statement.

"These high-risk situations were de-escalated and resolved with no arrests," the authorities said, adding that "police resources are fully stretched" in dealing with the obstruction, which appeared to involve hundreds of trucks.

The protests threatened to disrupt business today, with authorities stating that City Hall will remain closed, traffic will be disrupted and some other services stalled. 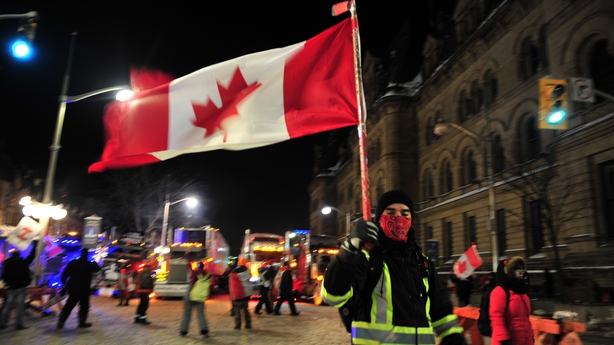 The protest originated last week in western Canada, where dozens of truckers organised a convoy to drive from Vancouver to the Canadian capital to demonstrate against Covid-related restrictions, particularly a recent vaccination requirement for truck drivers crossing the long US-Canada border.

Multiple convoys began arriving in Ottawa last Friday, and were joined by thousands of other anti-vaccination protesters.

In solidarity with the convergence on Ottawa, truckers yesterday staged what police described as a "complete blockage" of Highway 4 in Canada's western Alberta province along the US border.

The road is a major artery for commercial goods between the nations.

"As of right now... the port of entry remains open technically speaking, however nobody would be able to get to them except on foot," Curtis Peters, a spokesman for the Royal Canadian Mounted Police in Alberta, said, adding that some 100 trucks were blocking the roadway.

In Ottawa, the desecration of a war memorial and harassment of some city officials and NGO volunteers sparked an angry response, and the police said they had launched "several investigations".

"I am sickened to see protesters dance on the Tomb of the Unknown Soldier and desecrate the National War Memorial," Wayne Eyre, chief of the country's Defence Staff, said on Twitter.

"Those involved should hang their heads in shame."

I am sickened to see protesters dance on the Tomb of the Unknown Soldier and desecrate the National War Memorial. Generations of Canadians have fought and died for our rights, including free speech, but not this. Those involved should hang their heads in shame.

Barricades were installed yesterday to block vehicle access to the area around the war memorial, after several illegally parked vehicles were towed away.

And an organisation advocating for the homeless, Shepherds of Good Hope, said its workers had been "harassed" by protesters demanding meals on a particularly cold weekend.

It said it had briefly given free meals to some demonstrators in an effort to defuse tensions, but added: "This weekend's events have caused significant strain to our operations at an already difficult time."

With protesters gathering, Prime Minister Justin Trudeau and his family were moved on Saturday to an undisclosed location in Ottawa, Canadian media reported.

Ottawa Mayor Jim Watson fumed over what he called "threatening" behaviour by some of the protesters, particularly against the media.

"Stop the bully tactics and show some respect to fellow Canadians," he said on Twitter.

Later, in an interview with the CBC, Mr Watson said it was time for protesters to "move on" so Ottawa can return to normal.

"Quite frankly, (residents) feel they're prisoners in their own home," he said.