US President Joe Biden sought to reset his presidency in a marathon first year press conference yesterday, vowing to reconnect with voters and touting successes, while delivering blunt assessments of the "disaster" facing Russia if it attacks Ukraine.

"Can you think of any other president that's done as much in one year?" Mr Biden asked, ticking off the struggle against Covid-19 and trillions of dollars in government funding to save the US economy from pandemic fallout.

"I don't think there's been much on any incoming president's plate that's been a bigger menu than the plate I had given to me," he said. "The fact of the matter is, we got a lot done."

Speaking on the eve of the anniversary of his inauguration on 20 January, 2021, Mr Biden held only the second White House press conference of his presidency, surprising many by staying at the podium for one hour and 52 minutes.

The exchange, according to US media, extended beyond even the longest of the famously rambling - though far more frequent - press conferences held by Donald Trump. 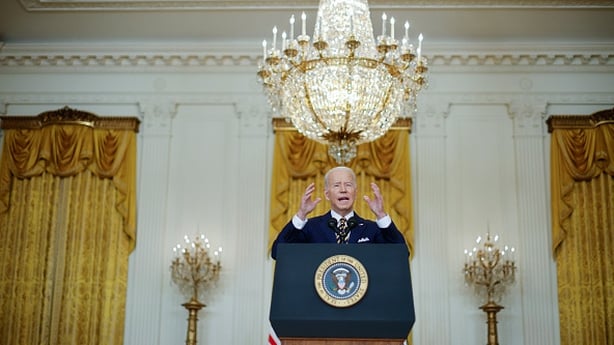 At various times combative, joking and meandering, Mr Biden rejected criticism over his handling of the pandemic and soaring inflation.

Asked about his approval ratings, which have sunk into the low 40% area, Mr Biden was curt.

"I don't believe the polls," he said.

Mr Biden acknowledged missteps since taking over from Mr Trump, citing "a year of challenges".

These included that he "didn't anticipate" the ferocity of Republican obstruction to his agenda in Congress.

On Covid testing capabilities, which continue to struggle to meet demand, he said "we should have done it quicker".

Fighting inflation will be "hard and take a lot of work".

"It's going to be painful for a lot of people," he said, noting that high prices were being felt "at the gas pump, the grocery stores and elsewhere."

On one of the most traumatic episodes of his presidency - the chaotic and rushed final withdrawal from the 20-year long Afghanistan war - Mr Biden said flatly: "I make no apologies."

"There was no way to get out of Afghanistan after 20 years easily," he declared.

The press conference focused especially heavily on the looming crisis in Ukraine, where the United States is leading Western efforts to find a diplomatic solution to Russia's military posturing on the border.

Mr Biden said he was ready to meet Mr Putin and bluntly warned the Kremlin leader that an attack on Ukraine would be "a disaster" for Russia.

However, Mr Biden raised eyebrows when he appeared to suggest that a small-scale attack by the Russians would prompt much less pushback from the West.

The White House quickly issued a statement clarifying that what he meant was that any military invasion would prompt a "severe" response, while non-military aggression, like paramilitary attacks, would be met with a "reciprocal" response.

With a State of the Union speech to Congress set for 1 March, Mr Biden faces a diminishing period to engineer a strategy to fight off a Republican comeback at midterm congressional elections this November.

Republicans are forecast to crush his party and take control of the legislature.

That risks bringing two years of complete obstruction from Congress, likely including threats of impeachment and a slew of aggressive committee probes.

Mr Trump, who continues to perpetuate the claim that he beat Mr Biden in 2020, is eyeing an attempt at another presidential run in 2024.

Mr Biden confirmed he would keep Kamala Harris as his vice presidential running mate in a re-election bid.

And he said that while Democrats proved unable to use their razor-thin congressional majority to pass two big priorities - the Build Back Better social spending bill and election law reforms - they could instead settle for passing "big chunks" of the legislation.

A reminder of that failure was coming later yesterday evening when the Senate was all but certain to block the voting rights reforms.

Above all, Mr Biden emphasized his desire to leave the confines of the White House after a year featuring a decidedly light travel schedule.

"Number one: I am getting out of this place more often. I am going to go out and talk to the public," he said.

"I find myself in a situation where I don't get a chance to look people in the eye, both because of Covid and the situation in Washington," he said, describing how he wanted to "connect with people, let them take a measure of my sincerity."