Mr Šefčovič slipped on an icy step as he arrived at the government's country residence Chevening, in southeast England, after freezing overnight temperatures. 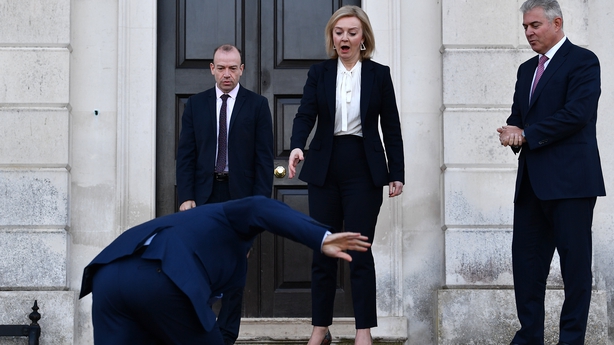 But he recovered to keep his balance and greet Ms Truss, who took over at the helm of the talks after Brexit minister David Frost's resignation last month.

Inside, the two sides are focusing on Northern Ireland.

The Northern Ireland Protocol was signed separately from the wider 2020 Brexit trade deal between the UK and the EU and aims to avoid a "hard" border on the island of Ireland.

"Glad to meet my counterpart @trussliz to discuss the implementation of the Protocol on IE/NI," Mr Sefcovic tweeted as discussions started, sharing photos of the pair greeting each other and walking in Chevening's picturesque grounds.

"My objective: stability, predictability in NI," he added, noting they had an opportunity to build on "far-reaching proposals" set out last year by Brussels to ease the on-the-ground tensions.

🇪🇺🇬🇧 Glad to meet my counterpart @trussliz to discuss the implementation of the Protocol on IE/NI.

In Dec, we delivered on medicines. Now we have an opportunity to do so on other issues, building on the EU's far-reaching proposals. My objective: stability, predictability in NI. pic.twitter.com/HoCTjziiHo

Since New Year's day, Britain has begun imposing customs checks on goods coming from the EU.

That has meant long queues of trucks building up in the key channel ports in France and on the British side.

More food safety checks are to be introduced in July.

The new British red tape does not apply, for the moment, to goods coming from Ireland due to the sensitive negotiations around the Northern Ireland protocol.

That was the last decision by Mr Frost before his pre-Christmas resignation as Brexit minister.

Brussels thinks Ms Truss is more likely to strike a deal than her predecessor. The political turmoil in Westminster may also mean the British want to get rid of this thorny issue soon.

Observers have suggested that Liz Truss will bring a different style to the relationship, compared to the abrasive and often antagonistic Mr Frost.

There has been speculation that the use of Chevening House will be the first step in a more constructive dialogue.

At the same time, Ms Truss took to the pages of the Sunday Telegraph last weekend, threatening to trigger Article 16 of the protocol if the EU does not agree to far-reaching changes to the protocol.

On the fundamentals of how to reduce the volume of checks and controls on goods moving from Britain to Northern Ireland, both sides are some distance apart, and some refined English hospitality is unlikely to soften Mr Šefčovič's position.

The EU delegation will also be mindful that Ms Truss is a likely contender to succeed Boris Johnson, if and when that process happens, and that will likely play into how hardline, or how flexible, she intends to be on the Northern Ireland Protocol.