Rescue teams in Pakistan are working to clear routes to a locked-in hill town sheltering thousands of tourists after 22 people died in vehicles trapped by heavy snow.

The resort town of Murree, around 70km northeast of Islamabad, was inundated with tourists and daytrippers last week after unusually heavy snow turned it into a winter wonderland.

But a blizzard from Friday onwards felled trees and blocked narrow roads leading in and out of the town, which clings to steep hills and valleys at an altitude of 2,300 metres.

"It was not snow, and not even heavy snow, it was unprecedented... with four to five feet in few hours," Tariq Ullah, an administrative official in nearby Nathia Gali, said.

"I never saw such a huge snowstorm in my life. There were strong winds, uprooted trees, avalanches. People around were terrified, each having his or her own account of suffering."

Officials said nearly 100,000 visitors in thousands of vehicles had thronged the town by Friday, causing an enormous traffic jam even before the blizzard.

They said 22 people died in vehicles trapped in the snow overnight on Friday - either from cold, or carbon monoxide poisoning from exhaust fumes generated by drivers running engines to keep warm.

They included 10 children - six who died alongside their mother and father, a policeman.

"We are switching on the heater and going to sleep," Dawn newspaper quoted assistant inspector Naveed Iqbal as saying in a final call to his son in the capital.

Prime Minister Imran Khan said he was shocked and upset by the tragedy, but that the unprecedented snowfall and rush of people "caught district admin unprepared".

Several Pakistan newspapers, however, excoriated administrators, noting the country's weather bureau warned as early as 6 January of the approaching blizzard.

"All concerned authorities are particularly advised to remain 'ALERT' during the forecast period," the National Weather Forecasting Centre said on Thursday, adding "heavy snowfall" could cause road closures in Murree and elsewhere.

Authorities have promised an investigation. 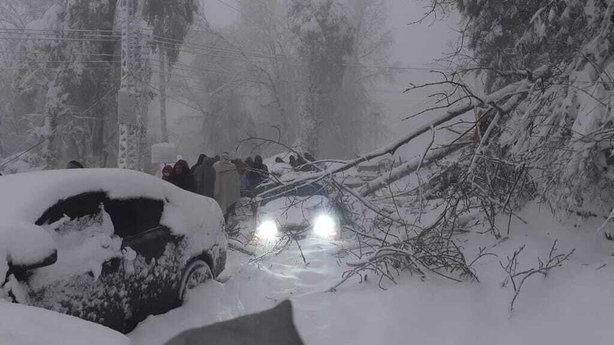 "Our first priority was rescue, which is ongoing, then relief," Hasaan Khawar, spokesman for the Punjab provincial government, said.

"Then a high-level inquiry will be launched and if there is any kind of negligence, then action will be taken against all those involved."

The Pakistan military's public relations department said they had pulled all survivors from cars trapped along the route to Murree and taken them to shelters set up in the town.

Over 1,000 abandoned vehicles along the route were hampering efforts by bulldozers to clear snow from roads, it said, and in some areas troops were using shovels.

Leading up to the weekend, Pakistan social media had been full of pictures and videos of people playing in the snow around Murree, a picturesque resort town built by the British in the 19th century as a sanatorium for its colonial troops.

Authorities warned as early as last weekend that too many vehicles were trying to enter the town, but even that failed to discourage hordes of daytrippers from the capital.

Many Pakistanis complained that Murree hoteliers and guest-house owners had compounded the problem by price gouging, prompting stranded people to spend the night in their cars rather than pay for a room.

"Things would have been different if local people and hotels were cooperative, but the reputation and conduct of the local people of Murree are very bad in this respect," a senior government official said.

There were also reports, however, of locals throwing open their homes to stranded tourists and offering food and blankets to those caught in the open.