A man is due to appear in court on Tuesday after a massive fire completely destroyed South Africa's national assembly.

The blaze at the historic legislature continued to rage this evening.

An investigation has been opened into the fire, which started at around 3am Irish time, in the parliament complex's oldest wing, which was completed in 1884 and has wood-panelled rooms.

As day dawned, smoke could be seen billowing from the building against a blue sky.

"The entire chamber where the members sit... has burned down," parliamentary spokesman Moloto Mothapo said, adding that the blaze had still not been extinguished and two fires had apparently been sparked in two separate areas of the precinct.

No casualties have been reported but President Cyril Ramaphosa told reporters at the scene a man had been held and that sprinkler systems had apparently failed. 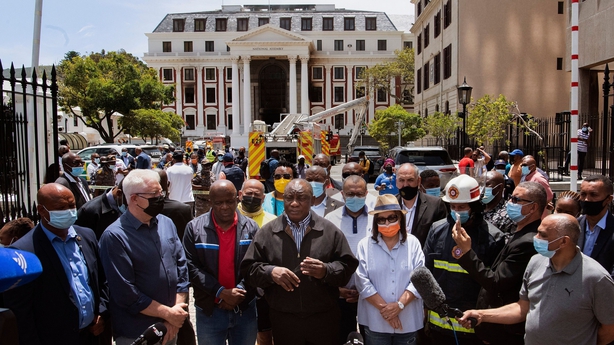 Later, police said a suspect was due in court.

The historic parliament building houses a collection of rare books and the original copy of the former Afrikaans national anthem "Die Stem van Suid-Afrika" ("The Voice of South Africa"), which was already damaged.

"The roof of the Old Assembly building has collapsed and is gone," Jean-Pierre Smith, Cape Town's mayoral committee member for safety and security, told reporters earlier.

"The entire building has suffered extensively smoke and water damage," Smith said, adding "the fire has not been contained". 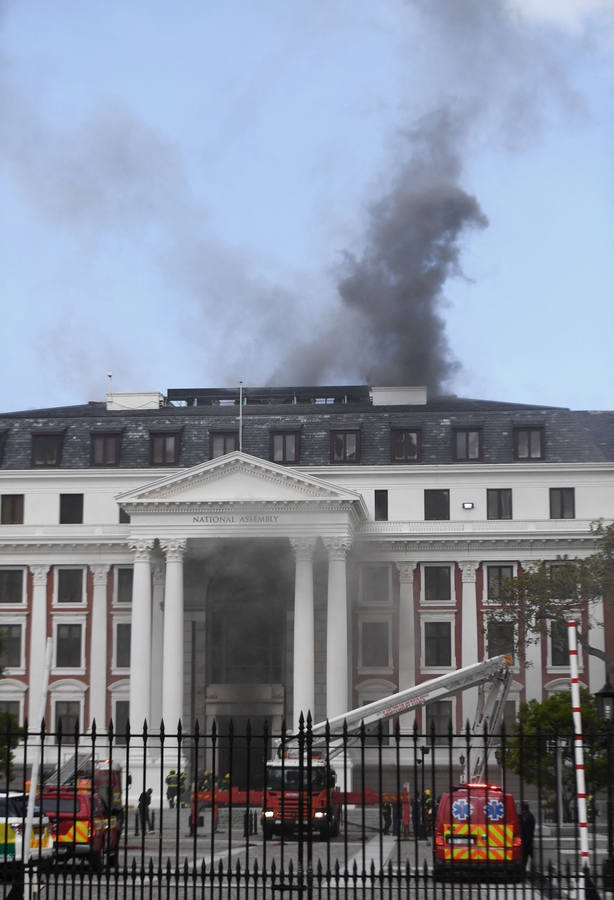 After ravaging the older wing of the building, the flames spread to newer parts of the complex which are currently in use.

"Firefighters are currently trying to control the fire in the New Wing, where the fire has affected the National Assembly Chamber," Mothapo told an online news conference earlier in the day.

A team of firefighters who were first to arrive at the scene battled the flames for several hours before being forced to retreat and call for reinforcements. 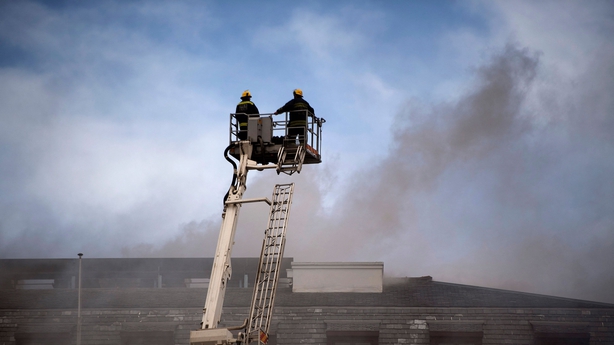 Around 70 firefighters were later deployed, some using a crane to spray water on the blaze.

Inside the rooms, fine showers of grey ash fell from the ceiling to the floor, which was already littered with debris.

Emergency services said they feared the fire could spread swiftly through the old rooms, which are decorated with wood, thick carpets and curtains.

Images broadcast on television had earlier shown giant flames leaping from the roof.

The area around the fire in the upmarket neighbourhood was quickly cordoned off.

The cordon stretched to a square where flowers were still displayed in front of the nearby St George's Cathedral, where anti-apartheid icon Archbishop Desmond Tutu's funeral took place yesterday.

Cape Town has been home to South Africa's houses of parliament since 1910, when separate administrations formed a union under British dominion and became a predecessor to the modern South African republic.

The site includes the National Assembly and the upper house National Council of Provinces, while the government is based in Pretoria.

It was in parliament where South Africa's last apartheid president FW de Klerk announced in 1990 plans to dismantle the brutal white-minority regime.

The houses of parliament in Cape Town consist of three sections, with the newer additions constructed in the 1920s and 1980s.

Another fire also broke out in the older wings of parliament in March, but it was quickly contained.

Cape Town suffered another major fire in April, when a blaze on the famed Table Mountain which overlooks the city spread, ravaging part of The University of Cape Town's library holding a unique collection of African archives.