A state funeral for Archbishop Desmond Tutu, a hero of the struggle against apartheid in South Africa, has been held at St George's Cathedral, Cape Town, where for years he preached against racial injustice.

Delivering the main eulogy, Mr Ramaphosa said: "Our departed father was a crusader in the struggle for freedom, for justice, for equality and for peace, not just in South Africa, the country of his birth, but around the world."

The president then handed over the national flag to Archbishop Tutu's widow, Nomalizo Leah, known as "Mama Leah". "Small in physical stature, he was a giant among us morally and spiritually," said retired Bishop Michael Nuttall, who served as Archbishop Tutu's deputy for many years. 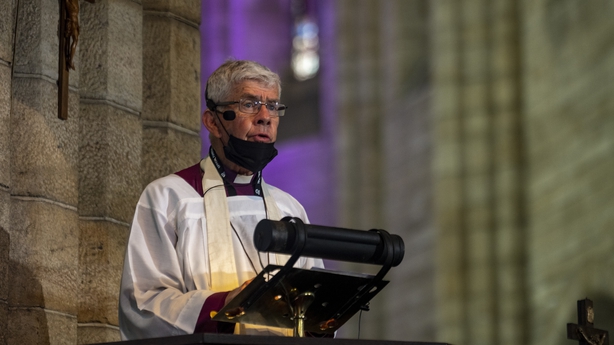 The cathedral and the Table Mountain that rises above the city have been illuminated every night this week in purple, the colour of Archbishop Tutu's clerical robes.

Life-size posters of Archbishop Tutu, with his hands clasped, were placed outside the cathedral, where the number of congregants was restricted in line with Covid-19 measures.

Among the mourners was former President of Ireland Mary Robinson.

Hundreds of well-wishers had queued on Thursday and yesterday to pay their last respects to the archbishop as he lay in state at the cathedral.

His simple coffin was once again wheeled into the church as the service got under way this morning. 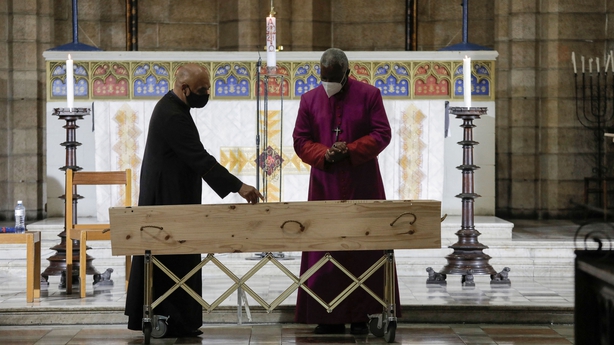 The choir then gave a resounding rendition of "Great is Thy Faithfullness".

Archbishop Tutu was widely revered across South Africa's racial and cultural divides for his moral integrity. He never stopped fighting for his vision of a "Rainbow Nation" in which all races in post-apartheid South Africa could live in harmony.

Cape Town, the city where Archbishop Tutu lived for most of his later life, was unseasonably rainy as mourners gathered to bid farewell to the man fondly known as "The Arch" and often described as South Africa's "moral compass".

As Anglican archbishop of Cape Town, Archbishop Tutu turned St George's into what is known as a "People's Cathedral" a refuge for anti-apartheid activists during the turbulent 1980s and 1990s when security forces brutally repressed the mass democratic movement. 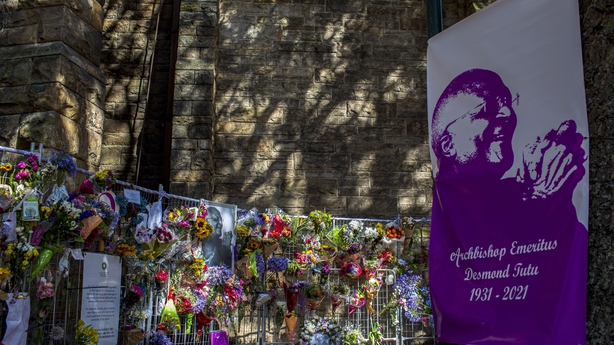 The sun shone brightly after the requiem mass as six white-robed clergy acting as pall bearers wheeled the coffin out of the cathedral to a hearse.

Archbishop Tutu's body will be cremated and then his ashes interred behind the cathedral's pulpit in a private ceremony.

A small crowd of around 100 people followed the funeral proceedings on a big screen at the Grand Parade, opposite City Hall where Archbishop Tutu joined Nelson Mandela when he gave his first speech after being freed from prison.

Mandela, who became the country's first post-apartheid president and who died in December 2013, once said of his friend: "Sometimes strident, often tender, never afraid and seldom without humour, Desmond Tutu's voice will always be the voice of the voiceless."