The International Olympics Committee said today its president had had a 30-minute video call with Chinese tennis star Peng Shuai, as international pressure mounted for information about her wellbeing.

The former doubles world number one had not been seen or heard from publicly since she said on Chinese social media on 2 November that former vice premier Zhang Gaoli, now in his 70s, forced her into sex during an on-off relationship spanning several years.

Neither Mr Zhang nor the Chinese government have commented on her allegation. Ms Peng's social media post was quickly deleted and the topic has been blocked from discussion on China's heavily censored internet.

"At the beginning of the 30-minute call, Peng Shuai thanked the IOC for its concern about her well-being," it said, adding that "she explained that she is safe and well, living at her home in Beijing, but would like to have her privacy respected at this time".

"That is why she prefers to spend her time with friends and family right now. Nevertheless, she will continue to be involved in tennis, the sport she loves so much."

Following a global outcry, including from tennis superstars and the United Nations, Chinese state media reporters have released a flurry of footage purporting to show all is well with Ms Peng.

Mr Bach had been accompanied on the call with her today by the chair of the IOC Athletes' Commission, Emma Terho, and IOC Member in China Li Lingwei, who had known Ms Peng for many years from her time in the Chinese Tennis Federation, the IOC statement said.

"I was relieved to see that Peng Shuai was doing fine, which was our main concern," Ms Terho said.

"She appeared to be relaxed. I offered her our support and to stay in touch at any time of her convenience, which she obviously appreciated."

The call ended, the statement said, with Mr Bach inviting Ms Peng "for a dinner once he arrives in Beijing next January, which she gladly accepted, and the two agreed to include Emma Terho and Li Lingwei". 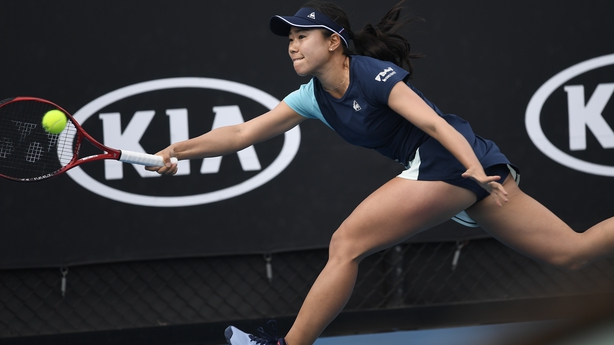 Seven people, including Ms Peng, were at the Sichuanese restaurant, said the manager, Zhou Hongmei, adding that they ate in a private room and were joined by the restaurant's owner.

"It was crowded at the restaurant as usual," Mr Zhou said, showing a bill that included noodles and bamboo shoots.

"They didn't have much. I think they mostly chatted."

The issue of Ms Peng's safety and whereabouts has emerged as China prepares to host the Winter Olympics in Beijing in February, amid calls from global rights groups and others for a boycott over its human rights record.

Searches for Ms Peng's name on popular Chinese microblog Weibo continued to yield no results this morning, and discussions about her initial accusations have been blocked on social media.

Mr Hu of the Global Times also tweeted Ms Peng's purported appearance at the tennis tournament. The Global Times is published by the People's Daily, the official newspaper of China's ruling Communist Party.

Videos posted by Hu and a Global Times reporter showed her smiling, waving and signing autographs for children.

The 37-second video that Mr Hu posted showed Ms Peng standing in a row of people being introduced to the audience. An announcer says, "two-time Grand Slam champion, former world number one in woman's doubles - Peng Shuai!" She waves, smiling, and acknowledges applause.