Members of the Afghanistan women's youth development football team have been airlifted to the UK in an evacuation flight funded by US reality star Kim Kardashian West.

The 35 female players and their families, 130 people in total, touched down at Stansted Airport shortly before 4am today, according to the ROKiT Foundation.

We're very proud of the integral role ROKiT played in securing the safe passage of the Afghan Girls Youth Football Team to Pakistan and successful onward journey to the UK. We are sure they will contribute positively in the UKs communities going forward. We’re proud of them all. pic.twitter.com/rqLau91yxs

The squad had been in Pakistan on temporary 30-day visas since escaping from Afghanistan following the takeover by the Taliban, but faced being sent back once their asylum period ran out if another country had not accepted them.

A privately-funded charter flight brought them to the UK, where they will begin their new lives following a 10-day coronavirus quarantine in hotel accommodation.

A representative for Ms Kardashian West confirmed that the flight was funded by her and her SKIMS brand.

Siu-Anne Gill, chief executive officer of the ROKiT Foundation which helped to co-ordinate the footballers' escape from Afghanistan, said she was "extremely humbled by the courage shown by these girls".

"That's inspired us to ensure that their efforts in getting over the border don't go to waste," she said.

Leeds United are among organisations that have offered to help the girls, she said.

Ms Gill said she hoped the "family of football" would help the squad in their "second chance at life".

She said the girls, aged from 12 and up to members of the under-23 team, had been given phones loaded with some credit by the charity.

A government spokesperson said: "Like others we have brought to the UK from Afghanistan, the Afghanistan girls' football team will receive a warm welcome, support and accommodation.

"The government is committed to doing all it can to support those most in need, including vulnerable women and girls at risk who have had to flee Afghanistan."

It comes as a senior UN official warned Afghanistan's deep economic crisis threatens to raise the "risk of extremism" in the region.

The war-ravaged country finds itself on the brink of a humanitarian disaster as foreign assets and monetary assistance remain frozen after the Taliban's return to power in August.

UN envoy to Afghanistan Deborah Lyons told the UN Security Council that with the local economy in tatters, illicit drugs, arms flows and human trafficking are likely to surge.

The UN has warned that around 22 million Afghans, or about half the country, will face food shortages this winter.

"The reality of the current situation threatens to heighten the risk of extremism," Ms Lyons said.

"The ongoing paralysis of the banking sector will push more of the financial system into on unregulated informal money exchanges which can only help facilitate terrorism, trafficking and further drug smuggling," Ms Lyons warned, adding: "These pathologies will first affect Afghanistan but then they will infect the region." 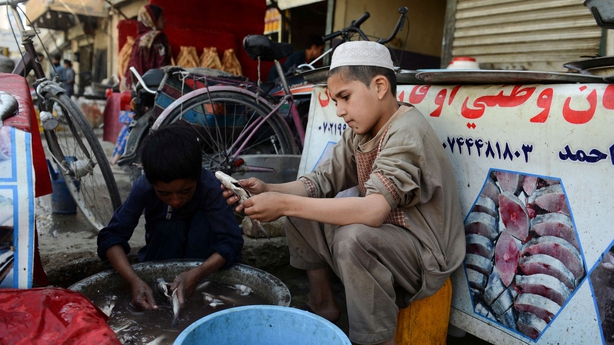 Ms Lyons spoke soon after the Taliban issued a statement urging US politicians to release the country's frozen assets.

In an open letter, Taliban Foreign Minister Amir Khan Muttaqi said the biggest challenge facing Afghanistan was financial insecurity, "and the roots of this concern lead back to the freezing of assets of our people by the American government".

Washington has seized nearly $9.5bn (€8.38bn) in assets belonging to the Afghan central bank, and the aid-dependent economy has effectively collapsed - with civil servants unpaid for months and the treasury unable to pay for imports.

Ms Lyons also lamented that the Taliban has been unable to stem the spread of the Islamic State in Afghanistan.