Belarus has said that President Alexander Lukashenko and German Chancellor Angela Merkel agreed in a telephone call that Minsk and Brussels should discuss the migrant crisis on the Belarusian-Polish border.

Thousands of migrants, mainly from the Middle East, are camped on the border in what the West says is revenge for sanctions slapped on Lukashenko's regime after its brutal suppression of protests against his rule.

Lukashenko and his main ally Russian President Vladimir Putin have rejected the accusations and criticised the EU for not taking in the migrants.

Citing Lukashenko's press service, Belarus state news agency Belta said the Belarus leader and Merkel "agreed that the problem as a whole will be brought up to the level of Belarus and the EU".

"Relevant officials to be determined from both sides will immediately start negotiations to resolve the existing problems," Belta said.

Those discussions will also consider the wishes of the migrants to get to Germany, the news agency added, saying that Lukashenko and Merkel agreed on maintaining contacts.

The call was the second between the Belarusian and German leaders this week, after Putin had called on EU leaders to talk directly to Lukashenko.

The migrants say they want to get to Germany via Poland and Lukashenko has said that he is ready to send them there by plane if necessary.

Migrants have been trying to cross from Belarus into EU member Poland for months, but tensions soared last week as coordinated efforts to cross were turned back by Polish border guards.

The EU accuses Lukashenko of luring the migrants to the Polish border, a claim he has denied.

Border crisis 'could last for months'

Poland's defence minister has warned that the crisis on the Belarusian border could last for months, saying migrants had been "attacking the Polish border" again during the night.

Poland yesterday fired tear gas and deployed water cannon against people trying to cross over in an escalation of a months-long stand-off on the EU's eastern border. 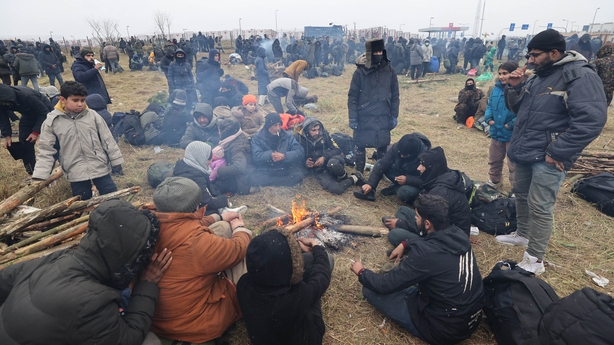 Mr Blaszczak said that attempts to cross the border had continued during the night, adding that migrants had used the same "method of attacking the Polish border" as yesterday.

"The public attention focused on what happened in Kuznica, while smaller groups of migrants tried to break through the Polish border in other sections, also at night," he said.

The border guard service said it had detected "161 attempts at illegal crossing" yesterday, including "two forceful attempts to cross the border registered during the evening".

Polish police today said nine police officers were injured in the clashes, along with a border guard and a soldier.

"We stand in solidarity with Poland and all the allies affected."

At least eight migrants have died at the border during the crisis. One, a 19-year-old Syrian man, was buried in the northeastern Polish village of Bohoniki. 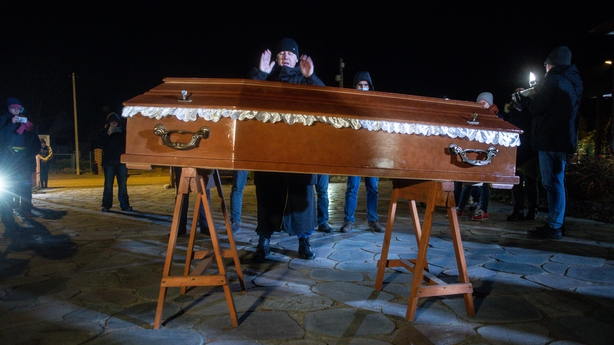 A nine-year old Kurdish boy who has had both legs amputated was among those stuck between the lakes, swamps and forests at the frontier after Poland refused to let them in and Belarusian forces prevented them heading back.

"We can see enormous suffering of people who are left in limbo," said Dunja Mijatovic, human rights commissioner for the Council of Europe, a European rights watchdog that is larger than the EU and also counts Russia among its members.

After visiting a migrants' aid centre in a Polish town nearby the border, she said: "We need to find a way to de-escalate, to make sure that the focus is on stopping the suffering."

The Taoiseach has told the Dáil that Belarus's attempt to "to blackmail the EU ... simply will not work".

Speaking during Taoiseach's Questions, Micheál Martin rejected recent reports that Ireland will not support additional sanctions against the Lukashenko regime.

He said that Ireland is "co-sponsoring a fifth package of sanctions", which "will be finalised very soon".

"This is an issue that I am particularly angry about myself", he said, pointing to the "exploitation of migrants for political purposes".

"It is quite shocking" how migrants are being used "as a retaliation measure for sanctions", he said.