At least one person has died in torrential rains that trapped motorists in mudslides, forced thousands to evacuate their homes and cut off Vancouver from the rest of Canada.

Search and rescue teams recovered the body of a woman from a mudslide near Lillooet, 250km north of Vancouver, the Royal Canadian Mounted Police said.

Staff Sergeant Janelle Shoihet added that investigators have received two missing person reports, but that they believe "there may have been other occupied vehicles that were lost in the slide".

"The total number of people and vehicles unaccounted for has not been confirmed," she said.

The rains had let up by late yesterday afternoon. But mudslides, rocks and debris washed out several roads leading to Vancouver, trapping hundreds of motorists who were rescued by military helicopters by nightfall on Monday.

Local television showed video footage of the Trans Canada highway, which connects the coastal city to the rest of the country, inundated. A bridge was also washed out.

Other routes have also been closed, according to Drive BC, which said on Twitter: "Highways are closed until further notice."

As a result, motorists wanting to travel to or from Vancouver would have to travel south to the US and back up into Canada.

Anyone taking this circuitous route, however, would have to show proof of a negative Covid-19 test upon re-entry into Canada.

Landslides also cut off rail traffic to and from Vancouver - one of Canada's busiest freight sea ports.

"Both CN and CP Rail indicate that no rail traffic is currently able to transit between Kamloops and Vancouver," a port spokesperson said.

He was to speak with the province's premier, John Horgan, later in the day to see what federal help might be needed.

"We'll be there to help in any way, shape or form," he told reporters. 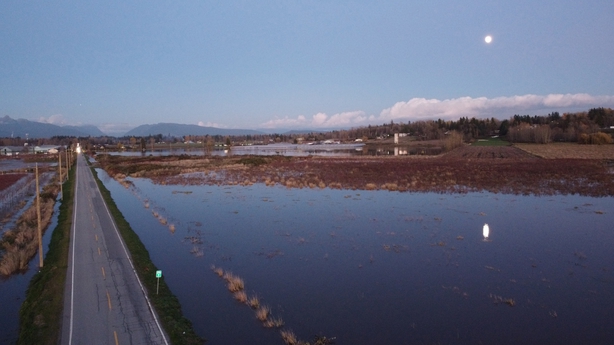 Environment Canada said up to 250mm of rain - what the region normally gets in a month - fell on Sunday and Monday in and around Vancouver, which was also hit last week by a rare tornado.

The extreme weather comes after British Columbia suffered record-high temperatures over the summer that killed more than 500 people, as well as wildfires that destroyed a town.

Yesterday, thousands of British Columbians were unable to return to their homes due to evacuation orders still in effect due to flooding in a dozen communities - including all of Merritt and parts of Abbotsford - and as many as 9,000 homes were without power.

In Merritt, flooding compromised the wastewater treatment plant, while thousands in Abbotsford reportedly slept in their cars on an elevated road overnight, as farms in the Fraser Valley were inundated.

Others took shelter at emergency sites set up across the province, with some also sleeping in church pews or at schools, local media said.

Views as crews work to assess the #BCstorm damage on our highways:
- Flooding on #BCHwy1 and No. 3 Road Overpass
- Crews survey the damage on #BCHwy7 at Ruby Creek
- Overflow in the Fraser Valley at Whatcom Road Interchange
- Work on #BCHwy1 at Patterson Creek pic.twitter.com/j4jdZFvIx1

Floods have also hampered pipelines. Enbridge Inc shut a segment of a British Columbia natural gas pipeline as a precaution.

The storms also forced the closure of the Trans Mountain pipeline, which carries up to 300,000 barrels per day of crude oil from Alberta to the Pacific Coast.

Copper and coal miner Teck Resources Limited said the floods had disrupted movement of its commodities to its export terminals, while potash exporter Canpotex Ltd said it was looking for alternatives to move the crop nutrient overseas.

Directly to the south of British Columbia, in Washington state, heavy rains forced evacuations and cut off electricity for over 150,000 households on Monday.

The US National Weather Service yesterday issued a flash flood in Mount Vernon, Washington, "due to the potential for a levee failure".