British Prime Minister Boris Johnson has said that COP26 has "sounded the death knell for coal power", but said his delight at any progress made at the Glasgow summit is "tinged with disappointment".

Mr Johnson hailed what he called a "truly historic" outcome to the summit, describing the agreement as "game-changing", but acknowledged not all countries were willing to meet the level of ambition expected by many.

He insisted the aim of keeping global temperatures from rising above 1.5C was "still alive".

Mr Johnson said most of Western Europe and North America have been persuaded to pull the plug on financial support for all overseas fossil fuel projects by this time next year.

"And when you add all that together, it is beyond question, Glasgow has sounded the death knell for coal power," he said at a Downing Street press conference this evening. 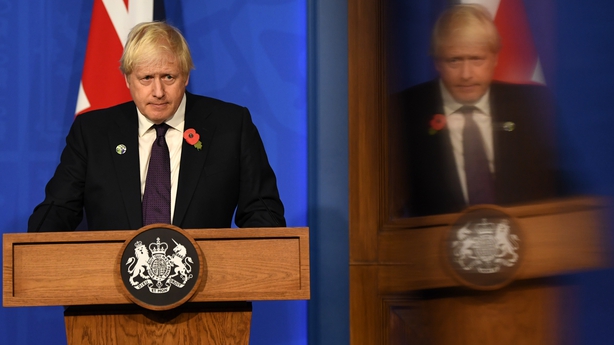 "It's a fantastic achievement and it's just one of many to emerge from COP26.

"90% of the world's economy is now following our lead here in the UK by committing to net-zero, ending their contribution to climate change altogether.

"I know it's tempting to be cynical and to dismiss these types of summits as talking shops. But we came to COP26 with a call for real action on coal, cars, cash and trees, and real action is exactly what we got."

But he added: "Of course, my delight at this progress is tinged with disappointment.

"Those for whom climate change is already a matter of life and death, who can only stand by as their islands are submerged, their farm land turned to desert, their homes battered by storms, they demanded a high level of ambition from this summit.

"While many of us were willing to go there, that wasn't true of everybody. Sadly that's the nature of diplomacy.

"We can lobby, we can cajole, we can encourage, but we cannot force sovereign nations to do what they do not wish to do.

"It's ultimately their decision to make and they must stand by it.

"But for all that, we can be immensely proud of what has been achieved by Alok Sharma and his team."

Mr Johnson said the world is "undeniably heading in the right direction", adding: "Even the most pessimistic commentator will tell you that 1.5 degrees, that goal of restricting the growth in temperatures to 1.5 degrees, is still alive.

"Now the work continues to make that ambition a reality."

Mr Johnson said there is still a long journey ahead and "very little time to complete it".

But he added: "COP26 has shown that we can do this. We can end our reliance on coal and fossil fuels.

"We can put the brakes on runaway climate change, and we can preserve our unique planet for generations to come."

The final accord has come in for criticism, with UK shadow business and energy secretary Ed Miliband warning "keeping 1.5 degrees alive is frankly in intensive care", with a "chasm" between what was agreed in Glasgow and what still needs to be done to slash emissions.

The UN's climate change chief Patricia Espinosa, however, said the goal of limiting temperature rises to 1.5C is "definitely alive" after the summit.

The conference also secured agreement on finalising key parts of the "Paris rulebook", on areas such as establishing carbon markets and transparency over the action countries are taking, which have been outstanding since that climate treaty was agreed in 2015.

The final decisions come after a fortnight of negotiations in Glasgow which began with 120 world leaders attending the summit.

A series of deals by countries and businesses on cutting methane emissions, curbing deforestation, switching to electric cars, driving investment in clean technology and phasing out coal power were announced alongside the formal negotiations, as part of efforts to drive "real-world" climate action.