The British trawler impounded for a week by France in a deepening dispute over fishing rights has sailed from the French northern port of Le Havre after receiving permission to leave.

The Cornelis-Gert Jan, which is accused of gathering two tonnes of scallops in French waters without a proper licence, departed around 5pm.

The lawyer for the ship's captain, Mathieu Croix, said a court in the nearby city of Rouen had allowed it to leave without posting any financial guarantee.

He told AFP that the court had rejected the state's demand that the trawler remain impounded until a €150,000 bond was deposited. The vessel's captain Jondy Ward was present in court for the hearing.

"It is a good decision, of a kind that will allow the tensions to drop," said the lawyer. "French justice is independent from political pressure," he added.

Mr Ward then joined his seven crew members to begin the journey back, smiling at journalists on the shore.

He still faces a trial in Le Havre on 11 August, 2022 on charges of non-authorised fishing in French waters by a boat from outside the European Union, which carry a maximum fine of 75,000 euros ($87,000).

The vessel's departure comes ahead of talks tomorrow between British Brexit Minister David Frost and French Europe Minister Clement Beaune in Paris aimed at finding a solution to the crisis.

The dispute over post-Brexit fishing rights has strained already troubled relations between Paris and London following Britain's exit from the European Union and has threatened to escalate into a full-blown trade war.

A director of a British fishing trawler said he was relieved the vessel had been allowed to leave.

"We are obviously delighted and relieved that the vessel can leave and our crew can get home," Andrew Brown, a director of MacDuff Shellfish, told Reuters.

"We are also very pleased the courts have not set any bond for the release of the vessel. We are just relieved that the crew, who remain in good spirits, are able to head home." 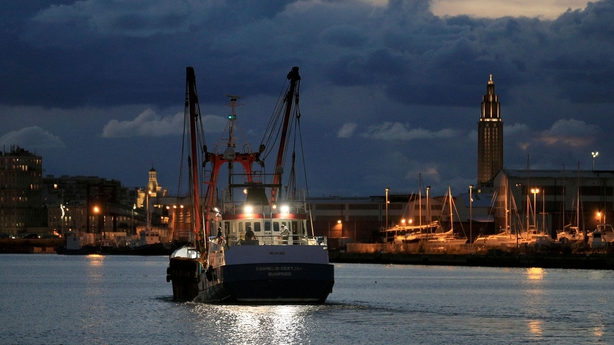 France had said earlier today that all options were still open concerning possible trade sanctions against Britain in the dispute over fishing rights.

He also announced there would be an EU Commission meeting on the issue on Friday.

"This is first and foremost a European subject and therefore the meeting at the European Commission will be very important and it will be necessary to await" its outcome before any sanctions are implemented, he added after a cabinet meeting at the Elysee.

He emphasised that "all options were on the table" regarding future sanctions after President Emmanuel Macron put off implementing the measures to give the talks a chance.

France has threatened to ban British boats from unloading their catches at French ports and to subject all UK imports to inspections.

Under a deal agreed by Britain and the EU late last year, European fishing vessels can continue to ply UK waters if they can prove they operated there in the past.

But dozens of French boats have had their applications to operate in the UK's fish-rich waters rejected.