The fatal shooting of cinematographer Halyna Hutchins by actor Alec Baldwin during the making of a movie in the US has raised questions over the use of guns on film sets.

Hollywood armourer Guillaume Delouche, who has been supplying weapons to filmmakers for three decades, with 75 titles to his name, said there were usually multiple safeguards against tragedy.

Why are guns used on a movie set?

Even though adding digital effects in post-production is relatively easy and cheap nowadays, a lot of directors and actors prefer to use real guns, said Mr Delouche, citing added authenticity.

"The problem with dummy weapons is that you take away the recoil and the smoke, which adds something to the acting," he said.

"When you give the actor a latex or plastic gun and add the effect of the bullet later with digital effects, there is still a clear difference."

How are guns handled on a film set?

"We treat blank weapons as if they were real weapons. In many cases, they are real weapons that have been modified," he explained.

"The weapons are kept in a safe. Once they are on the set, we organise the blank ammunition, which is marked and colour-coded to differentiate it.

"First, we show the crew and actors that the gun is empty before loading it.

"When we put blanks in a gun we announce it, several times."

What happens when a gun needs to be fired?

"We have very strict safety distances: you can't have someone less than 20 feet - or about six metres - in front of a weapon when it is fired.

"Even with blanks, there can be small debris that is projected. It's better to never aim at someone directly, so we work with the cinematographer to frame the shot and give the illusion that the person is in the line of fire.

"If we need to be closer we put up Plexiglas walls. We cover the operators and stagehands with fire blankets. They also have anti-noise helmets and safety glasses to protect against splinters." 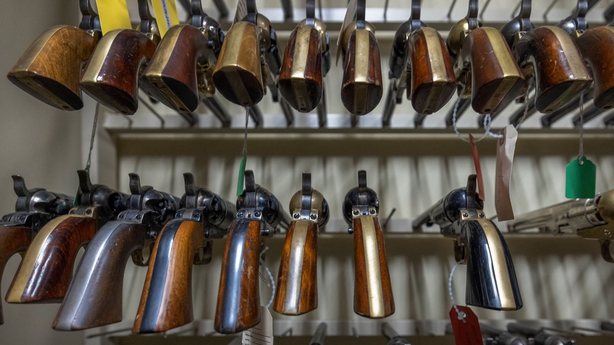 How can accidents happen?

It remains unclear what happened on the set of "Rust".

They can occur, however, if live ammunition is being used on set for some reason.

"But real ammunition has absolutely no place on a set because dummy bullets are also used and they could be confused," he said.

"A possibility is that a dummy bullet becomes separated from its casing and then enters the chamber of the gun.

"If a blank is put in behind that dummy, it effectively becomes a live round.

"This is what cost Brandon Lee his life (in 1993 on the set of "The Crow"). There was never a check by the prop maker, which would have prevented the accident.

"For an accident to happen, there is always a chain of errors that precede it."