Here they are, side by side. Two thin documents. Typewritten on different machines. The final pages of each a riot of signatures. One page of these signatures reproduced so much in Irish history books it has almost become an icon. The other version, similar but different – and with a small twist in its tale.

A modest, unassuming display, but what history these few pages represent.

The Anglo-Irish Treaty of 1921 formally ended the War of Independence, created a new state, marked the first break of the United Kingdom, and sparked a bitter and divisive civil war that scarred Irish politics for generations.

Now, for the first time since 6 December 1921, the two copies of the treaty have been reunited in the city they were created in. Both copies have lain in archives for 100 years, unseen by the general public until now.

An exhibition at the British Academy in London, showing not just the Two Treaties, but a host of other documents, photographs and newsreels, brings to life an intense period in the political life of two nations, with contending views on how they should co-exist.

And on the very day that a British negotiating team heads to Brussels to attempt the undoing of a more recent treaty, the exhibition's themes have a renewed relevance. This is "Long Wave" history.

Read more: Signing the Irish Treaty 1921: Into the Lion's Den

In an ornate, first floor salon in number 10 Carlton Gardens Terrace, home of the British Academy, I met Orlaith McBride, the Director of the Irish National Archives, where most of the documents have their permanent home.

"The materials have never been shown publicly before and I suppose, from our perspective, opening in London is very symbolic, in that 100 years ago, five men walked into Downing Street to commence negotiations on an Anglo Irish treaty. 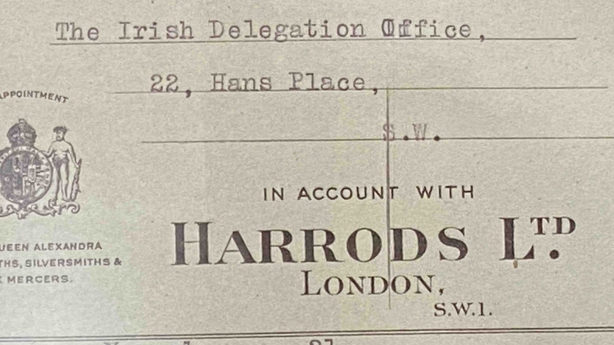 "We also wanted to create an exhibition that presents the historical and the political story around the Anglo Irish treaty, but also to tell the story of the lives of those men and women who came from Dublin in 1921, who rented two houses - one in Hans Place, the other in Kensington Gardens.

"They ran an administrative centre out of both those houses. But they also ran homes, so they had servants, they had cooks, they lived there, they socialised there, as well as there being the administrative basis in which they operated over the course of the two months."

The larger group went to some lengths to present themselves as representatives of a country, using some of the trappings of statehood in terms of where they dined and entertained, and how they travelled about town: Rolls Royce limousines were hired to bring the delegation to and from meetings.

But in the best traditions of the Irish Department of Finance, they were hired by the hour. The invoices form part of the exhibition, along with bills from Harrod's for food, since it was the nearest grocery store, and the London Telephone Exchange. As the first Minster for Finance, Michael Collins, wanted the spending fully vouched.

"First of all, they had their own headed paper - Dáil Eireann, and the office of the Irish Plenipotentiaries in London - so that was sending out a message in terms of the importance of why they were here, but also the importance of their establishment as an Irish government in law, in London," says Ms McBride. 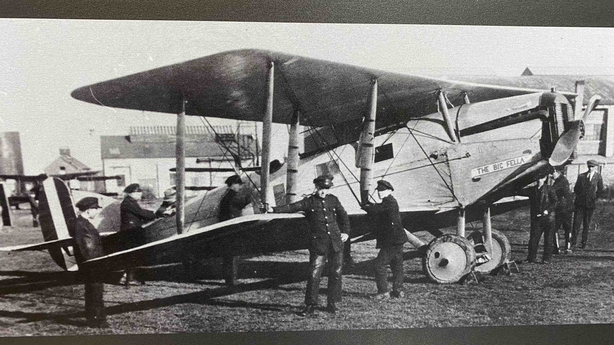 "We have receipts from dinners from the setting up of the offices, and the grocery bills, etc. Michael Collins was the Minister for Finance so he was meticulous in terms of record keeping, so every single shilling and pence that was spent, they accounted for them. And we have all of those receipts that went back to Dublin."

The director of the National Archives says that by today's standards, it was not a costly venture. Though it did involve an airplane.

The delegates had no qualms about buying a "government jet" in the pre-jet era. Just 17 years after the Wright Brothers took to the air with mechanical flight, the breakaway-state had its own flying machine on standby south of London.

"They felt that if negotiations broke down really quickly, they needed to get out and get back to Dublin, so they procured an airplane through a contact that they knew in Canada. It waited at an airbase in the south of London, and it was never used. But they had a plan if they had to get back from London very quickly. They had identified Leopardstown racecourse as the landing place for the plane," Ms McBride tells me, in front of a photograph of the plane and aircrew. 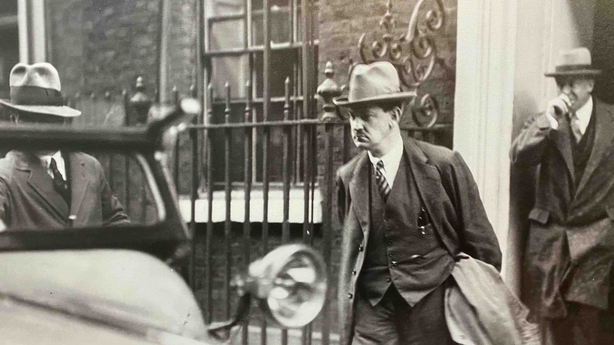 The delegates did not use it in the end, but it became the first aircraft in the new Irish Air Corps, and it was called "the big fella" after Michael Collins.

But the heart of the exhibition – its very point – are those two thin treaty documents. Just 18 articles – a far cry from the EU treaties we have become accustomed to holding referendums on. Physically slight though they are, they bear an enormous weight of history in their few pages. 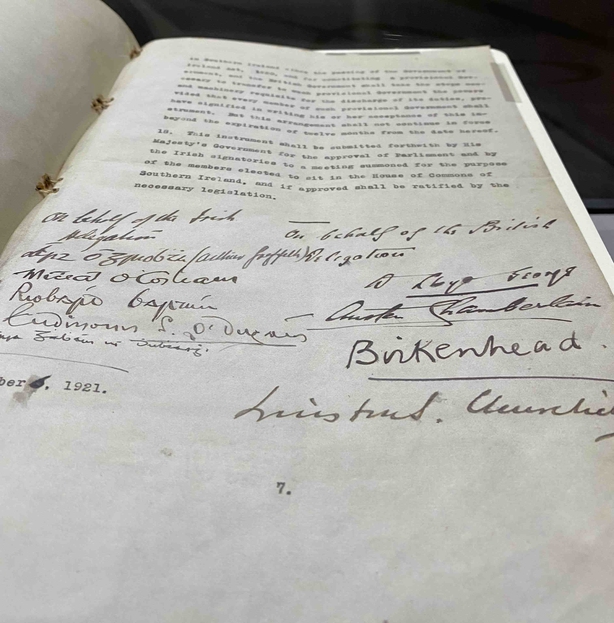 Even the list of signatories are astounding: Lloyd-George, Churchill, Birkenhead, Chamberlain, Collins, Griffith, Gavan-Duffy and Barton, some of whose private papers form part of the display – including a table plan, showing who sat where during the negotiations – as shown in a drawing for the Illustrated London News, which is the only visual representation of the events inside Number 10.

Robert Barton was the Dáil's Minister for Economic Affairs, and on his death in 1975, was the last surviving member of the delegation. His cousin, Erskine Childers, was one of the Irish "Civil Servants", sitting in the cabinet room in Downing Street, assisting with the drafting. Novelist, gun-runner, RAF intelligence officer, the Cambridge graduate was later executed by the state he was helping to found.

But it is another of the five Irish delegates – Eamon Duggan, a solicitor and director of intelligence during the War of Independence, who had been released from jail under the truce of July 1921 – who catches the eye in this exhibition. Or rather, his signature on the British copy, kindly lent by the UK National Archives, of the treaty does.

"It stands out from the others. Literally," Ms McBride explains.

"So, on the night that the treaty was signed, it was 2am on 6 December 1921. Those delegates who were in Downing Street signed it there and then - both the Irish copy and the British copy.

"But there were some Irish delegates who weren't in Downing Street, so the British sent around a representative the following morning to get the other Irish plenipotentiaries to sign their copy of the Treaty. So, George Gavin Duffy signed his name, but Eamon Duggan had already left - he'd gone with the Irish copy of the treaty back to Dublin on the mailboat from Holyhead."

One of the Irish administrative staff came up with a solution to the problem of the missing signature. 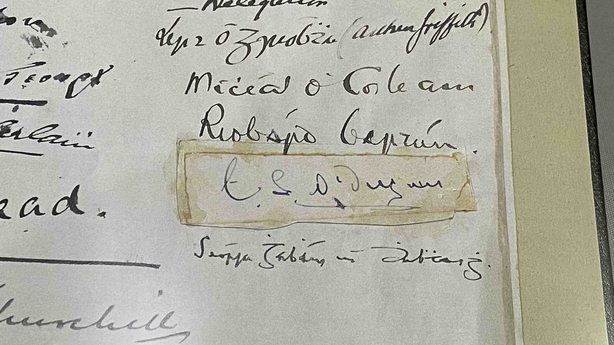 "There had been an event at the end of October in the Royal Albert Hall, organised by the Irish League of Self Determination – it was a huge event where the Plenipotentiaries were introduced to the London Irish. All of them had autographed a copy of the programme for the event. So Kathleen McKenna, who was one of the secretaries, she said why don't we cut out Eamon Duggan's signature from the Royal Albert Hall programme and use it.

The exhibition "The Treaty 1921: Documents from the Archives", is at the British Academy, London, until 23 October, and is part of the Embassy of Ireland in London's programme of events to commemorate the centenary of the Anglo-Irish Treaty.

It includes an exhibition of Portraits of the British and Irish negotiators by John Lavery.