The son and namesake of the Philippines' former dictator Ferdinand Marcos has said he will run for president in the 2022 election, as the controversial clan seeks the ultimate political revival.

"I am today announcing my intention to run for the presidency of the Philipines in the upcoming May 2022 elections," the 64-year-old said, joining a growing field of contenders seeking to replace Mr Duterte.

"I will bring ... unifying leadership back to our country."

Marcos Jr was in second place behind Mr Duterte's daughter, Sara, in a recent PulseAsia Research survey of voter preference for president, though she has denied plans to run.

A tilt for the country's highest office comes after Mr Marcos Jr's failed bid for the vice presidency in 2016, which he narrowly lost to Leni Robredo. 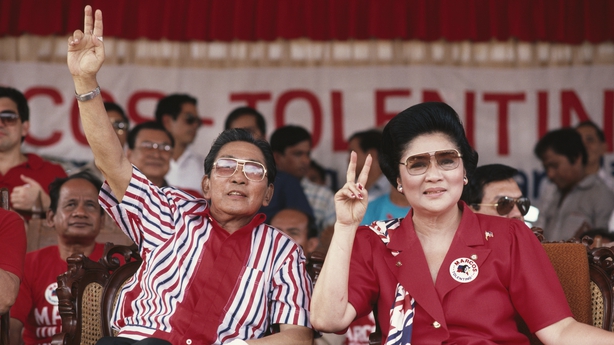 Losing the election was a blow for the Marcos family, which had gone into exile in the US after the patriarch's humiliating downfall in 1986.

He and his wife Imelda were accused of massive corruption while in power.

Mr Marcos has tried to defend his father's rule by citing the initial surge of economic growth and government spending under martial law in the 1970s, rather than the fraud and mismanagement that later impoverished the nation.

While he admits that his father's rule was marked by human rights abuses, he minimises them, saying such acts take place under every administration.

He claims he was too young to shoulder any responsibility for his father's rule, but critics point out that he served as governor of the family's home province of Ilocos Norte from 1983 to 1986, while the elder Marcos was in power.

Mr Marcos was also appointed chairman of a government-controlled satellite service provider in 1985.