Philippine President Rodrigo Duterte has said he will not run for vice president in 2022 and will retire from politics, potentially paving the way for his daughter to contest the country's highest office.

The 76-year-old, who polls show remains almost as popular as when he was swept to victory in 2016 on a promise to rid the country of drugs, is constitutionally barred from seeking a second term as leader, and are only permitted to serve a single six-year term.

"Today I announce my retirement from politics."

The authoritarian firebrand declared in August he would contest the country's second-highest office in the May election - a move critics said was a smokescreen and motivated by fear that he could face criminal charges after leaving office.

But a recent poll by Pulse Asia Research showed Mr Duterte well back in second place among preferred vice presidents.

A survey by Social Weather Stations showed 60% of Filipinos did not think Mr Duterte's run for the vice presidency was in the spirit of the constitution.

Mr Duterte made the surprise announcement at the venue where he was expected to register his candidacy without specifying when he would leave politics.

The tough-talking leader has not yet announced his preferred successor, but many expect it will be his daughter, Sara Duterte-Carpio, who has been the front runner in recent polls.

"He must have realised that if both Dutertes are talked about as running in 2022 then they might stand to lose, given the last survey results," University of the Philippines political science professor Jean Franco told AFP.

Analysts say Ms Duterte-Carpio would likely protect her father from criminal charges in the Philippines, and International Criminal Court prosecutors probing his deadly drug war, which rights groups estimate has killed tens of thousands of people.

But the mayor of the southern city of Davao - a position held by her father before he became president - has said she would not run if Mr Duterte sought the vice presidency.

But Mr Franco said she has until 15 November to make a late entry into the presidential race - as her father did in 2015.

The election season kicked off yesterday with candidates vying for thousands of posts from president to town councillor.

The week-long registration process launches a typically noisy and deadly seven months of campaigning for more than 18,000 positions - but the raging pandemic and economic misery caused by Covid lockdowns could dampen the party atmosphere.

Among other front runners for the top job are Mr Duterte's ally Ferdinand "Bongbong" Marcos, son and namesake of the country's former dictator, and ex-actor and city mayor Francisco Domagoso - known by his screen name Isko Moreno. 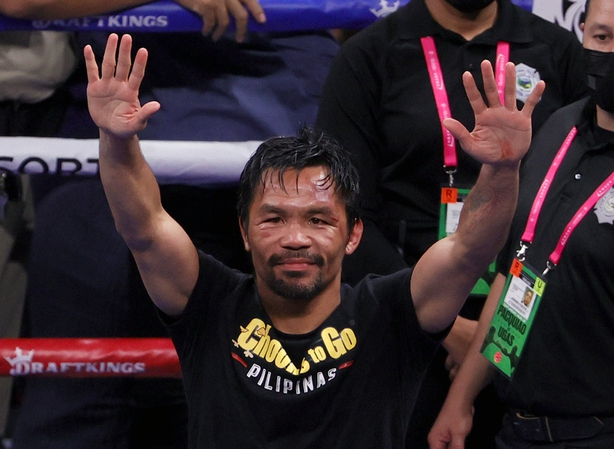 Despite ruling himself out of the vice presidential race and announcing his retirement, Mr Duterte's political future was still not clear, analysts said, noting he did not specify when he would leave politics.

"Duterte is a person whose word is really hard to count on," analyst Richard Heydarian told AFP.

"Let's see until the last moment."