The judge investigating last year's deadly Beirut port explosion had to suspend his work today, a court official said, after what rights groups and victims' families condemned as another blatant case of political obstruction.

In a second such suspension, Tarek Bitar will pause blast investigations until a court votes on whether to replace him in response to a complaint filed last week by ex-interior minister Nohad Machnouk, the official said on condition of anonymity.

Mr Machnouk is one of a raft of top officials suspected of negligence ahead of the port explosion that killed more than 200 people on 4 August last year.

If removed, Mr Bitar would be the second investigator to be sacked since the explosion amid widespread accusations of obstruction by Lebanon's political barons, who have largely dodged interrogation.

Mr Bitar's predecessor Fadi Sawan was removed in February, after ex-ministers he had called in for questioning submitted a similar request for a replacement. 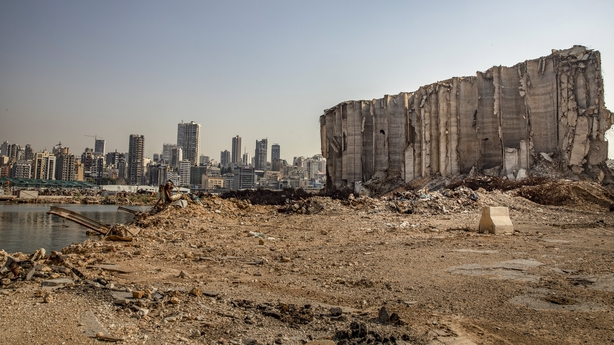 The latest move sparked an outcry from rights groups and relatives of blast victims, who accused the political elite of undermining the investigation into Lebanon's worst peacetime disaster.

Aya Majzoub, Lebanon researcher at Human Rights Watch (HRW), said the case "should make it patently clear that the Lebanese political class will do everything in their power to derail, obstruct and undermine the investigation and escape justice".

"These brazen obstructions of justice should be a wake-up call to the international community to authorise an international fact-finding mission," she said.

Ibrahim Hoteit, whose brother was killed in the blast, accused the political class of "deliberately wasting time" to thwart accountability.

"If Bitar is removed... we will burn down the country and we will turn to violence," he warned.

More than a year after the blast that destroyed swathes of the capital, the probe has yet to identify a single culprit.

Calls for an independent international investigation have been roundly rejected by Lebanon's political leaders.

The explosion was caused by hundreds of tonnes of haphazardly stocked ammonium nitrate, but what lit the fire remains unclear.

Top officials in parliament, government and top security agencies were all aware of the fertiliser's presence and its potential dangers, but failed to act.

In a report last month, HRW accused Lebanese authorities of criminal negligence in their handling of the ammonium nitrate shipment, and called for broad international sanctions against them.

The United Nations Security Council today "stressed once again the need for a swift, independent, impartial, thorough, and transparent investigation" into the blast.

In July, Mr Bitar demanded that parliament lift the immunity of Mr Machnouk, ex-finance minister Ali Hassan Khalil and former public works minister Ghazi Zaiter so that they can be questioned.

He has also asked for national security chiefs and ex-army commander Jean Kahwagi to be investigated.

But parliament has turned down his request and top leaders, including the powerful Shi'ite movement Hezbollah, have accused Mr Bitar of political bias.

Hezbollah has reportedly threatened Mr Bitar, according to local media.