Philippines President Rodrigo Duterte will not cooperate with the International Criminal Court's probe into the country's drug war, his lawyer has said, after its judges found the crackdown could be a crime against humanity.

Yesterday ICC judges authorised a full-blown investigation into Mr Duterte's anti-narcotics campaign, which rights groups estimate has killed tens of thousands of people, saying it resembled an illegitimate and systematic attack on civilians.

Mr Duterte "will not cooperate since first of all, the Philippines has left the Rome Statute, so the ICC no longer has jurisdiction over the country", chief presidential legal counsel Salvador Panelo told local radio DZBB.

"The government will not let in any ICC member to collect information and evidence here in the Philippines. They will be barred entry."

Mr Duterte pulled the country out of the Hague-based court after it launched a preliminary probe, but the ICC said it had jurisdiction over crimes committed while the Philippines was still a member.

Rights groups, lawyers and relatives of people killed in the drug war welcomed the ICC decision.

"I'm glad because this might be a way for us to get justice for the deaths of our loved ones," said Corazon Enriquez, who blames Mr Duterte for the killing of her son during a police raid on their home in 2016.

"That's what we're hoping for - for that person responsible for the deaths of our children and family members to pay."

Edre Olalia, the president of the National Union of Peoples' Lawyers, said the organisation hoped this was "the beginning of the end to impunity" while rights group Karapatan said: "Duterte and his cohorts should be made accountable for these crimes". 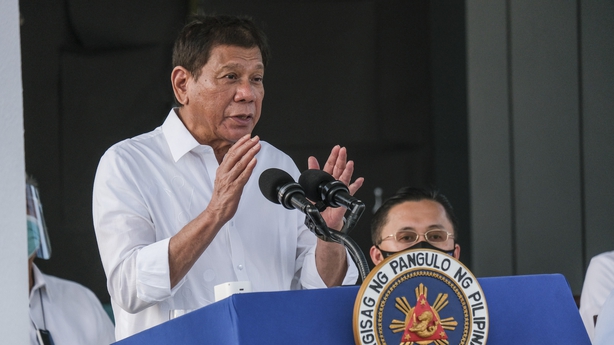 Mr Duterte was elected in 2016 on a campaign promise to get rid of the Philippines' drug problem, openly ordering police to kill drug suspects if officers' lives were in danger.

At least 6,181 people have died in more than 200,000 anti-drug operations conducted since July 2016, according to the latest official data released by the Philippines.

Mr Duterte has repeatedly attacked the world's only permanent war crimes court, calling it "bullshit" and vowing not to cooperate with its probe.

"From the start he has said he will die first before he will face foreign judges," Mr Roque told reporters.

"If there are complaints, they have to be adjudged in the Philippines because our courts are functioning, and the ICC court has no jurisdiction."

However the country's top judges disagreed, ruling earlier this year that the ICC can prosecute "government actors" for alleged crimes committed before the nation withdrew from the tribunal.

The ICC said there was a "reasonable basis" to believe that the crime against humanity of murder had been committed in the crackdown.

Its investigation will also cover alleged extra-judicial killings in the southern Davao region between 2011 and 2016, when Mr Duterte was mayor.

"If he's guilty, he should be held accountable," said Santos Reario, a barber in the capital Manila.

"Maybe that's why he's planning to run for vice president - to escape accountability."

Mr Duterte, barred under the constitution from seeking a second term, declared last month he will run for the country's second-highest office next year.

Critics said the move was partly driven by fear of criminal charges, though there is debate over whether the vice president enjoys legal immunity.

The government's refusal to cooperate would make the probe "hard", but she said ICC prosecutors could work with groups on the ground to get the evidence they needed.

Families said they were prepared to wait.

"Even if it will take a long time, at least we have something to look forward to instead of just waiting for nothing," said one victim's mother, who asked not to be identified.

"At least we have hope."