The Taliban will allow all foreign nationals and Afghan citizens with travel authorisation from another country to leave Afghanistan, according to a joint statement issued by the United States, Britain and dozens of other countries including Ireland.

"We have received assurances from the Taliban that all foreign nationals and any Afghan citizen with travel authorisation from our countries will be allowed to proceed in a safe and orderly manner to points of departure and travel outside the country," they said in the statement.

The statement said the countries, which also included Australia, Japan, France, Spain and many others, would continue to issue travel documents to designated Afghans.

At least 60 people eligible to travel to Ireland remain in Afghanistan having been unable to leave the country before the evacuation procedures closed. 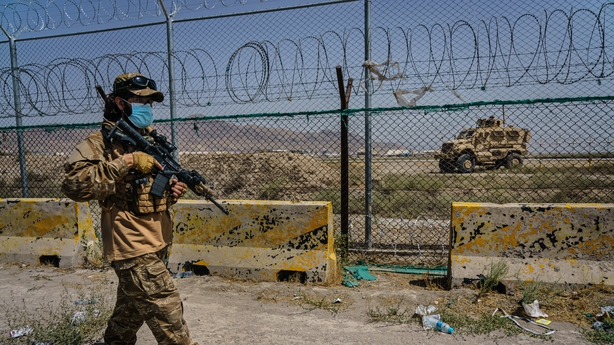 A spokesperson for the Department of Foreign Affairs here said it is continuing its consular operation, and "efforts to support citizens will be unstinting".

"We will be liaising with partners, including those who have a presence on the ground, to advise on safe options for remaining Irish citizens and immediate family members who wish to do so to leave the country in the period ahead. We will continue to provide guidance to people who have a right to Irish residency who are in Afghanistan," they said.

"We will also evaluate the situation on the ground with respect to recipients of visa waivers under the Irish Refugee Protection Scheme. While the visa waiver facilitates entry into Ireland we are not in a position to provide direct consular assistance to Afghan nationals in the country who wish to travel."

The Department of Children, Equality, Disability, Integration and Youth is working with regional support organisations to support refugees on arrival in Ireland, said the spokesperson, and "the Department of Foreign Affairs is providing support to a number of IRPP refugees who have left Kabul in recent days and who are en route to Ireland".

The United States said it destroyed an explosive-laden vehicle with an air strike in Kabul today, hours after President Joe Biden warned of another terror attack in the capital as a massive airlift of tens of thousands of Afghans entered its last days.

A Taliban spokesman confirmed the incident, saying a car bomb destined for the airport had been destroyed - and that a possible second strike had hit a nearby house.

The US said it had only struck the vehicle, but added that secondary blasts indicated "a substantial amount of explosive material".

Local media reported there may have been civilian casualties, which the US said it was assessing.

Today's strike on a vehicle comes after a suicide bomber from the Islamic State group on Thursday targeted US troops stopping huge crowds of people from entering Kabul's airport, from where about 114,000 people have been evacuated since 15 August when the Taliban swept back into power.

More than 100 people died in the attack, including 13 US service personnel, slowing down the airlift ahead of Mr Biden's deadline for evacuations to end by Tuesday.

Mr Biden arrived at Dover Air Force Base today to honour the members of the military killed in the suicide bomb attack last week. 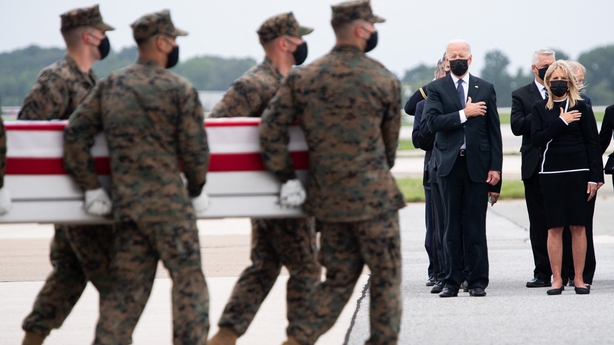 After arriving at the base in Delaware, Mr Biden and his wife Jill met with the families of service members killed in the attack.

They watched as flag-draped cases carrying 11 service members' remains were loaded into vans.

The remains of two more service members will be transferred in an event not covered by media at the request of their families.

The Afghan operation is winding down despite Western powers saying thousands may be left behind.

US Secretary of State Antony Blinken said some 300 Americans still in Afghanistan were seeking to leave the country.

"They are not going to be stuck," he told ABC, adding the US had "a mechanism to get them out".

The Pentagon said yesterday that retaliation drone strikes had killed two "high-level" IS jihadists in eastern Afghanistan, but Mr Biden warned of more attacks from the group.

"The situation on the ground continues to be extremely dangerous, and the threat of terrorist attacks on the airport remains high," Mr Biden said.

"Our commanders informed me that an attack is highly likely in the next 24-36 hours."

The US embassy in Kabul later released a warning of credible threats at specific areas of the airport, including access gates.

In recent years, the Islamic State's Afghanistan-Pakistan chapter has been responsible for some of the deadliest attacks in those countries.

They have massacred civilians at mosques, public squares, schools, and even hospitals.

While both IS and the Taliban are hardline Sunni Islamists, they are bitter foes - with each claiming to be the true flag-bearers of jihad.

The IS attack has forced the US military and the Taliban into a form of cooperation to ensure security at the airport that was unthinkable two weeks ago.

Yesterday, Taliban fighters escorted a steady stream of Afghans from buses to the main passenger terminal, handing them over to US forces for evacuation.

The troops were seen throughout the civilian side of the airport grounds and annex buildings, while US Marines peered at them from the passenger terminal roof.

After a 20-year war, the foes were within open sight of each other, separated by just 30 metres.

Pentagon spokesman John Kirby said US troops had started withdrawing - without saying how many were left.

Western allies that helped with the airlift have mostly already ended their flights, with some voicing despair at not being able to fly out everyone at risk.

The head of Britain's armed forces, General Sir Nick Carter, told the BBC it was "heartbreaking" that "we haven't been able to bring everybody out".

A White House official said 2,900 people were evacuated in a 24-hour period between Saturday and Sunday, a drastic reduction from earlier in the week.

Two Afghan athletes were able to leave last weekend and spent a week in France before a "major global operation" took them to Japan for the Tokyo Paralympics.

There was an emotional welcome for Zakia Khudadadi and Hossain Rasouli at the athletes' village last night.

"There were lots of tears from everyone in the room," said International Paralympic Committee spokesman Craig Spence.

French President Emmanuel Macron said talks had begun with the Taliban to "protect and repatriate" at-risk Afghan nationals beyond Tuesday.

France and Britain will tomorrow urge the United Nations to work for the creation of a "safe zone" in Kabul to protect humanitarian operations, he said.

The UN said it was bracing for a "worst-case scenario" of up to half a million more refugees from Afghanistan by the end of 2021.

At the airport, gone are the crowds of thousands mobbing the perimeter, hoping to be let through and allowed onto a plane.

The Taliban have now sealed off roads leading to the facility and are only letting sanctioned buses pass.

Afghanistan: The final countdown to US withdrawal

Meanwhile, the final UK troops and diplomatic staff have been airlifted from Kabul, drawing to a close Britain's 20-year engagement in Afghanistan and a two-week operation to rescue UK nationals and Afghan allies.

Named Operation Pitting, it was believed to be the largest British evacuation mission since the Second World War.

In a video uploaded to Twitter this morning, British Prime Minister Boris Johnson said the UK departure from Afghanistan was "the culmination of a mission unlike anything we've seen in our lifetimes".

The British government said of the 15,000 people evacuated since the Taliban seized Kabul, 5,000 of those were British nationals and their families.

More than 8,000 Afghans who helped the British effort as interpreters or in other roles, or who are otherwise vulnerable to persecution by the regime, were also able to flee to safety with their families.