Andrew Cuomo, who resigned as New York governor over sexual harassment allegations, has been stripped of the Emmy he won for his primetime pandemic briefings.

The Democrat won global plaudits for his straight-talking television performances about the coronavirus as it raged though the United States in early 2020.

His performances, which came as then-president Donald Trump sowed confusion with incoherent messages about the health crisis, earned him the International Emmy Founders Award.

But yesterday, the day after Mr Cuomo left the governor's mansion, the academy said it was taking back the gong.

"The International Academy announced today that in light of the New York attorney general's report, and Andrew Cuomo's subsequent resignation as governor, it is rescinding his special 2020 International Emmy Award," it said.

"His name and any reference to his receiving the award will be eliminated from International Academy materials going forward."

Past recipients of the award include Oprah Winfrey, Stephen Spielberg and Downton Abbey creator Julian Fellowes.

Mr Cuomo's confident performance at the beginning of the pandemic led to talk of a possible presidential run, as well as the emergence of dedicated band of fans, some of whom dubbed themselves "Cuomosexuals". 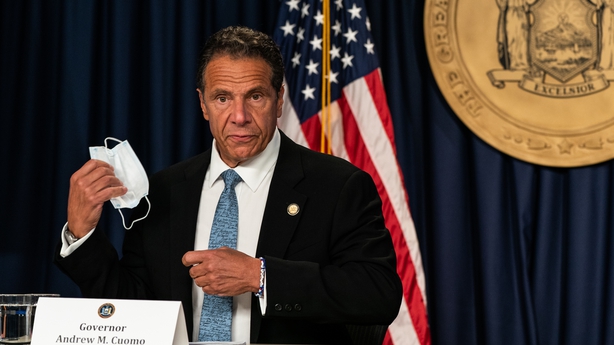 But his stock started to slide late last year as he became engulfed in accusations that he covered up the true extent of Covid-19 deaths at nursing homes.

Several women then came forward this year alleging that the 63-year-old had behaved inappropriately towards them.

The accusations culminated in an explosive report by state Attorney General Letitia James released this month that said he sexually harassed 11 women, including by engaging in unwanted touching.

In a pre-recorded speech on his final day on office on Monday, Mr Cuomo was defiant.

"There was a political and media stampede. But the truth will come out in time. Of that, I am confident," he said.

The difference between me and Andrew Cuomo? Neither of us is governor, but I still have my Emmy(s).

"Sex and the City" star Cynthia Nixon, who ran against Mr Cuomo for the governorship in 2018, launched a Twitter broadside about her one-time rival.

"The difference between me and Andrew Cuomo? Neither of us is governor, but I still have my Emmy(s)" she tweeted.