Greece's prime minister has linked the devastating blazes to the climate crisis, speaking last week as wildfires swept across the Mediterranean, engulfing parts of Greece, Italy and Spain.

Scores of firefighters battled fresh blazes today near the Greek port city of Lavrio, as helicopters and planes dropped water from the air, a firefighting official told AFP.

Locals from three nearby villages southeast of Athens were ordered to evacuate.

"The fire front is large and the winds in the area are very strong," said Thanasis Avgerinos, the deputy regional governor of East Attica.

"This is a very flammable pine-covered area."

Meanwhile, another forest fire broke out in Vilia, Attica, some 60km northwest of Athens, prompting the mobilisation of air and ground forces.

Authorities have called for the evacuation of two nearby villages, while another 40 firefighters were battling the blazes, according to a firefighting official.

The fires come on the heels of blazes in recent weeks that have destroyed homes, properties, pine forests, beehives and livestock across more than 100,000 hectares of affected land.

The island of Evia, 200km northeast of Athens, has paid the heaviest price with more than half of the hectares burned there. 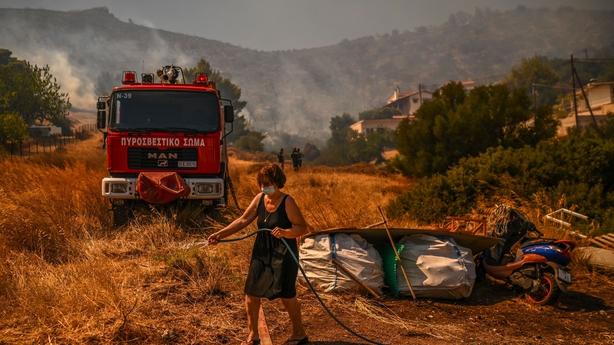 The Peloponnese peninsula, 300km west of Athens, but also the northern suburbs of the capital, were also heavily affected by some 600 fires.

The blazes were finally brought under control on Friday.

"The climate crisis tells us everything must change," he said.

As global temperatures rise, heatwaves are predicted to become more frequent and intense, and their impacts more widespread, scientists say.

Elsewhere, firefighters have gained ground against a wildfire in central Spain that forced hundreds from their homes.

They were helped by falling winds and an easing of what may well be a record-setting heatwave.

Nearly 1,000 firefighters backed by 15 water-dropping aircraft have been battling a blaze burning since Saturday morning in Avila province.

At one point the blaze was fed by winds of up to 70km/h. Today's weaker winds gave them some respite however.

If the improved weather conditions continued, firefighters should be able to stabilise the blaze later today.

The wildfire has so far destroyed (30,000 acres) of land and forced the evacuation over the weekend of nearly 1,000 people from several nearby towns and villages.

In neighbouring Portugal some 200 firefighters are battling a blaze near Castro Marim in the southern province of Algarve, a European tourism hotspot, local officials said.