Nearly 900 firefighters were slowly bringing a wildfire under control that has raged for nine days on the Greek island of Evia, authorities have said.

It comes as fresh forces were deployed to fight a massive blaze on the Peloponnese peninsula.

Greece has started to count the cost from wildfires that have scorched their way through thousands of hectares, leaving three dead, hundreds homeless, causing incalculable damage and capsizing the critical tourism season.

The fires have been fanned by the country's worst most severe heatwave in decades and the authorities have pointed the finger at climate change, which experts say increases the intensity and frequency of such extreme weather events.

Meanwhile, Algeria has become the latest Mediterranean country to be hit by devastating wildfires this summer, with the death toll there rising to 65 after eight people were killed in blazes in Turkey earlier in the month.

A huge multinational force has been deployed to back fire crews on the Greek island Evia, where the town of Istiaia has been under threat for days.

"I think we can say that the fire fronts are slowly coming under control," Istiaia mayor Yiannis Kontzias told state TV ERT.

"Yesterday, we saw the light of the sun for the first time in days," he said, referring to giant smoke clouds that have choked residents and obstructed flights by water-bombing aircraft.

But even as the immediate danger receded, Mr Kontzias said local businesses "face extinction" in coming months in a tourism season already decimated by the Covid-19 pandemic.

"We have lost the month of August, which would have sustained people here over the coming year."

"(Local) tourism has been demolished, most (visitors) have left," he said.

"The damage is huge, and the environmental disaster will have economic repercussions for decades."

From 29 July to 11 August, more than 93,000 hectares were burnt in Greece, according to the European Forest Fire Information System. The average area burnt over the same period between 2008 and 2020 was 2,330 hectares.

Dimitris Haliotis, the head of a Red Cross team who came to Evia from across the country in Patras, said that "the entire ecosystem is destroyed" on the island, with the loss of forest animals running in the hundreds.

Theodoros Roumeliotis, the local hoteliers president on the Greek spa town of Aidipsos, said August reservations had collapsed by 90%.

"Right now, hotels are obliged to refund €1 million in reservations cancelled," he said, adding that some operators were unlikely to survive the blow. 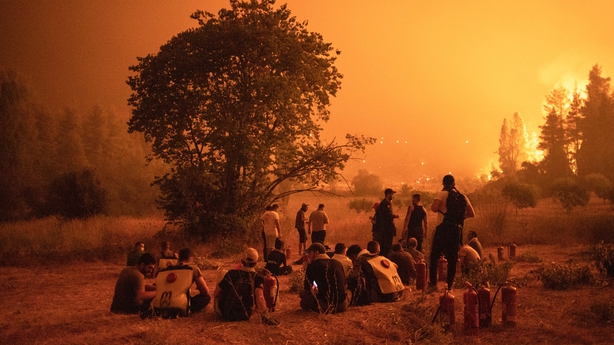 The fire situation was more precarious in the mountainous Peloponnese region of Gortynia.

"Villages do not seem at risk at the moment... but conditions change by the hour," he told ERT.

Forces in Gortynia have been beefed up to nearly 600 firefighters including crews from the Czech Republic, Britain, France and Germany.

EU states and other countries have so far contributed 21 aircraft, 250 vehicles and more than 1,200 firefighters, some of whom were due to arrive by Friday.

Support from abroad has helped avert an even greater disaster.

"When we arrived, it seemed like the whole of Greece was burning," said one of the French firefighters that arrived last week.

Another 60 firemen were tackling a smaller fire in Laconia, in the southeastern Peloponnese, the fire department said.

In Evia, nearly 900 firefighters had been deployed, including Cypriots, Moldovans, Poles, Serbs, Slovaks, Romanians and Ukrainians. Serbian, Swedish and Swiss planes and helicopters were among a fleet of seven aircraft providing support.

There have been growing calls in Greece for the resignation of top public safety officials who as recently as June had insisted that the country was well-prepared.

There was additional anger over the loss last week of much of the forest of Varibobi, one of Athens' last remaining nature reserves.

"We faced an operationally unique situation with 586 fires in eight days during the worst weather phenomenon in 40 years," he said.

Greek Prime Minister Kyriakos Mitsotakis this week apologised to the nation for any possible "shortcomings" in the state's response. He is to hold a press conference on Thursday.