Maria Kolesnikova, the last remaining protest leader still in Belarus, has gone on trial after 10 months in custody as the regime of Alexander Lukashenko seeks to crush all dissent.

President Lukashenko - in power since 1994 - has been cracking down on opponents since unprecedented protests erupted after last year's elections, deemed unfair by the West.

Ms Kolesnikova, a 39-year-old former flute player in the country's philharmonic orchestra, has become a symbol of the protest movement in Belarus.

She had said she would not leave Belarus voluntarily and was arrested last September as she tore up her passport to resist deportation to neighbouring Ukraine.

The pair are accused of undermining national security, conspiring to seize power and creating an extremist group.

They face up to 12 years in prison if convicted.

In a video from inside the court, Ms Kolesnikova - wearing a black dress and her signature red lipstick - was seen dancing and smiling next to Mr Znak inside the defendants' cage.

She also made a heart-shaped symbol with her hands, which she often did at protest rallies. 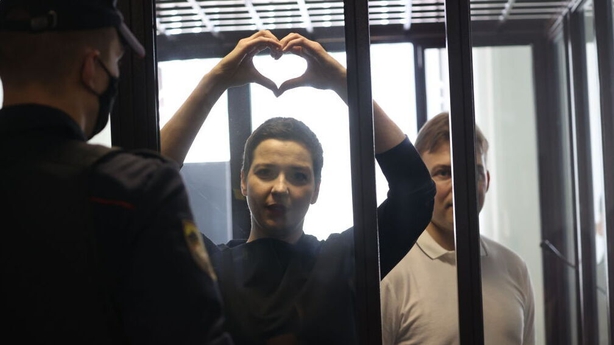 Ms Kolesnikova is the only protest leader still in Belarus.

Ms Tikhanovskaya, who stood for president in place of her jailed husband, was forced out of the country and granted refuge in Lithuania. Ms Tsepkalo also left Belarus.

Ms Kolesnikova and Mr Znak had previously worked for presidential hopeful Viktor Babariko, who was sentenced to 14 years in prison on corruption charges last month.

The opposition believes Ms Tikhanovskaya was the real winner in the August vote.

She has urged the West to toughen sanctions against President Lukashenko's regime, and met with US President Joe Biden last week and British Prime Minister Boris Johnson yesterday.

Border guards in Lithuania have been pushing back migrants trying to enter illegally from Belarus, as Vilnius struggles to contain an unprecedented influx.

Lithuanian officials say they suspect it is being orchestrated by the regime of President Alexander Lukashenko in retaliation against EU sanctions over his crackdown on political opponents.

"Anyone who tries to enter Lithuanian territory illegally will be refused entry and directed to the nearest operational international border control point," said Rustamas Liubajevas, head of the border guard service.

"Deterrent actions may be taken against those who do not comply," he told reporters, adding that some 180 migrants had been directed back to Belarus yesterday.

The decision taken by Lithuanian Interior Minister Agne Bilotaite, which came into force yesterday, allows authorities to use psychological and physical force to divert migrants to official border crossing points or diplomatic missions, where they can apply for asylum legally.

Mr Liubajevas refused to disclose the exact measures taken, but he did say the guards did not use force to push back migrants.

"This restricts the fundamental human right to seek asylum in a safe state," said Akvile Krisciunaite, a researcher at the Diversity Development Group.

"Belarus is not a safe country, and human rights are known to be grossly violated there," she added.

So far this year, Lithuanian border guards have detained more than 4,000 migrants - mostly Iraqis - compared with 81 for all of 2020.

Tensions between Minsk and Vilnius soared last year after Lithuania became a hub for the Belarusian opposition following the disputed presidential election.

The European Union has threatened to impose more sanctions on Belarus over President Lukashenko's crackdown on protests against the vote.

Meanwhile, Belarusian sprinter Krystsina Tsimanouskaya has arrived in Austria after leaving the Polish embassy in Tokyo where she had sought refuge after competing in the Olympic Games.

She is expected to travel on to Poland, which has offered her a humanitarian visa.