US President Joe Biden declared relations with Iraq would enter a new phase with American troops exiting combat operations in the country by year-end as he held talks with Prime Minister Mustafa al-Kadhemi.

Amid the threat of an Islamic State resurgence and Iran's powerful influence in Baghdad, Mr Biden stressed that Washington remains "committed to our security cooperation" while Mr Kadhemi reaffirmed their "strategic partnership."

US troops in Iraq will "to continue to train, to assist, to help, to deal with ISIS (Islamic State) as it arises," Mr Biden said.

But, in a shift that comes as the US pulls out of Afghanistan, the US leader confirmed that the 2,500 US troops still in Iraq will not be fighting.

"We're not going to be, at the end of the year, in a combat mission," he said.

Eighteen years after the US invaded Iraq to remove Saddam Hussein, and seven years after a US-led coalition battled Islamic State extremists who threatened the country, Washington turned its focus to other types of assistance.

Some 500,000 coronavirus vaccine doses pledged to Baghdad "will be there in a couple weeks," Mr Biden told Mr Kadhemi in the White House.

Mr Biden also emphasised US support for elections in October in Iraq, saying Washington is working closely with Baghdad, the Gulf Cooperation Council and the United Nations to ensure the elections are fair.

"We support strengthening Iraq's democracy and we're anxious to make sure the election goes forward," he said.

Mr Kadhemi said he was in Washington "to discuss the future of our nation".

"America, they help Iraq. Together we fight, fight and defeat ISIS," he said.

"Today, our relation is stronger than ever -- our partnership in the economy, the environment, health, education, culture and more." 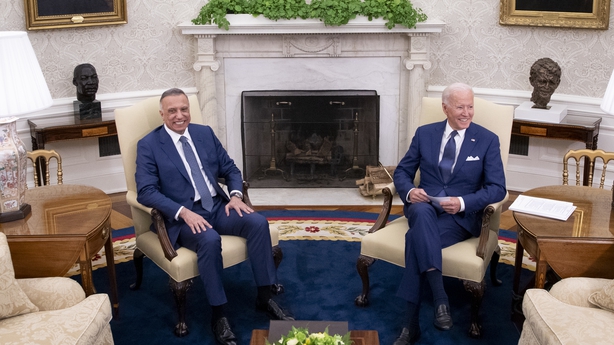 The face-to-face meeting, analysts said, was to give support and cover to Mr Kadhemi, in power for little over a year and under pressure from Iran-allied political factions to push US troops from his country.

A senior US official who would not be identified praised Mr Kadhemi for being pragmatic and "a problem solver rather than someone who tries to use problems for his own political interests".

The main concern from Washington is to lend enough support to Iraqi security forces to keep up the fight against the remnants of the Islamic State group, while also keeping a damper on Iran's influence in Iraq.

Since last year the principal role of the remaining US troops in Iraq has been to train, advise and support their Iraqi counterparts to battle Islamic State.

But powerful pro-Iran political factions, which are crucial to Mr Kadhemi retaining power, are overtly hostile to the US presence, and are accused of being behind rocket and drone attacks on bases in Iraq where US forces operate.

The Iraqi Resistance Coordination Committee, a group of militia factions, threatened to continue the attacks unless the US withdraws all its forces and ends the "occupation".

A drone attack was carried out Friday on a military base in Iraqi Kurdistan that hosts American troops, but did not cause any casualties.

A US State Department statement on the lower-level bilateral meetings that accompanied the Biden-Kadhemi summit emphasised US respect for Iraq's sovereignty.

"The bases hosting US and other coalition personnel are Iraqi bases and are operating per existing Iraqi laws; they are not US or coalition bases, and the presence of international personnel in Iraq is solely in support of the government of Iraq's fight against ISIS," it said.