The UN has warned that a "perfect storm" was brewing, with a raging pandemic disrupting access to routine vaccinations, leaving millions of children at risk from measles and other deadly diseases.

A full 23 million children missed out on basic childhood vaccines last year, as routine health services were hit worldwide by restrictions aimed at controlling Covid-19 and many parents shunned the clinics that were open for fear of exposure to the virus.

It marks the highest number in over a decade and 3.7 million more than in 2019, according to data published by the World Health Organization and the UN's children's agency UNICEF.

The sharp decline in routine vaccinations comes as many countries have begun loosening restrictions even as the pandemic is far from over.

This has the potential of not only driving up Covid transmission, but also of allowing otherwise vaccine-preventable diseases to begin spreading.

That is because the restrictions in many countries have until now also provided a buffer protecting unvaccinated children against exposure to childhood diseases.

"In 2021, we have potentially a perfect storm about to happen," said Kate O'Brien, head of the WHO's vaccines and immunisation department.

She warned there was now "an accumulation of children who are not immune because they haven't received vaccines, and more and more transmission because of too early release of public health and social measures.

"This is the sort of perfect storm we're ringing the alarm bell about right now," Ms O'Brien said, stressing WHO's "high concern about these very outbreak prone diseases".

"We need to act now in order to protect these children." 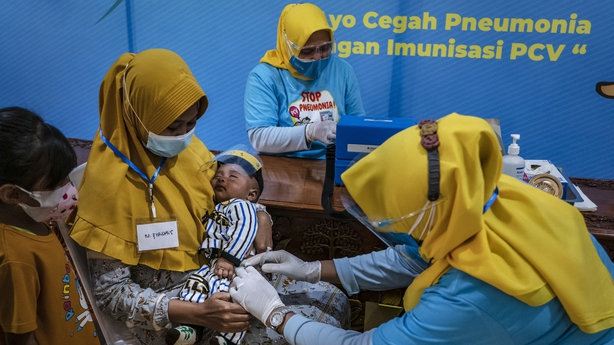 Even more concerning perhaps, as many as 17 million children, mainly living in conflict-affected communities or in under-serviced remote areas or in informal slum settings, likely did not receive a single vaccine in 2020.

"The Covid-19 pandemic and related disruptions cost us valuable ground we cannot afford to lose," UNICEF chief Henrietta Fore said in the statement, cautioning that "the consequences will be paid in the lives and wellbeing of the most vulnerable".

She said even before Covid, "there were worrying signs that we were beginning to lose ground in the fight to immunise children against preventable child illness".

"The pandemic has made a bad situation worse."

Global coverage for all three DTP doses had for instance stalled at 86% over recent years, but then slumped to 83% in 2020, meaning 22.7 million children missed out.

As for measles, which is highly contagious and requires vaccination uptake of at least 95% to avoid spread, the first-dose vaccination rate slipped from 86% to 84% last year, while only 71% received a second dose.

The situation meanwhile varies greatly, with the data showing a particularly sharp drop in vaccination rates in Southeast Asia.

Up to 1⃣7⃣ million children likely did not receive a single vaccine during last year.

Most of these children 👧👦 live in conflicted-affected communities, slum areas or under-served remote places. 👉https://t.co/bt6n7OAQrq pic.twitter.com/Zrvls5jusM

In India, which has been ravaged by a devastating second Covid wave, the number of children who missed their first DTP dose more than doubled to over three million last year from 1.4 million in 2019.

Coverage for all three DTP doses in the country meanwhile fell from 91% to 85%, the data showed. Pakistan, Indonesia and the Philippines also saw the number of unprotected children rise significantly.

In the Americas, meanwhile, the UN agencies warned that "a troubling picture is also emerging", although not necessarily due to the pandemic.

They warned that funding shortages, vaccine misinformation and other factors were continuing to push down the rate of children who have received all three DTP shots, which fell from 91% in 2016 to just 82% last year.

Countries reporting an alarming rise in children who haven't received a single vaccine during the pandemic.

To save lives, we need urgent action now. https://t.co/7WS6RMFTDo

The UN has warned against sacrificing routine childhood vaccines in the rush to roll out Covid jabs.

"Even as countries clamour to get their hands on Covid-19 vaccines, we have gone backwards on other vaccinations, leaving children at risk from devastating but preventable diseases like measles, polio or meningitis," WHO chief Tedros Adhanom Ghebreyesus warned in the statement.

"Multiple disease outbreaks would be catastrophic for communities and health systems already battling Covid-19, making it more urgent than ever to invest in childhood vaccination and ensure every child is reached."