Heavy rains and floods lashing western Europe have killed at least 59 people in Germany and nine in Belgium, and many more people are missing as rising waters caused several houses to collapse today.

Cars were left upended, houses were destroyed and people were stranded on rooftops in Germany.

In Belgium, several days of heavy rain has caused rivers in the French-speaking region of Wallonia to burst their banks.

The provinces of Liege and Namur were especially affected, with the resort town of Spa completely flooded.

Thousands of people in the south of the Netherlands were urged to leave their houses quickly to escape floods as rivers were on the brink of bursting their banks.

Several towns and villages along the Meuse river in the province of Limburg strongly advised people to seek refuge as there was a large chance that their home would be flooded in the coming hours.

Hundreds of soldiers and 2,500 relief workers were helping police with rescue efforts in Germany.

Tanks were deployed to clear roads of landslides and fallen trees and helicopters winched those stranded on rooftops to safety.

Around 200,000 households lost power due to the floods.

In Ahrweiler, two wrecked cars were propped steeply against either side of the town's stone gate and locals used snow shovels and brooms to sweep mud from their homes and shops after the floodwaters receded. 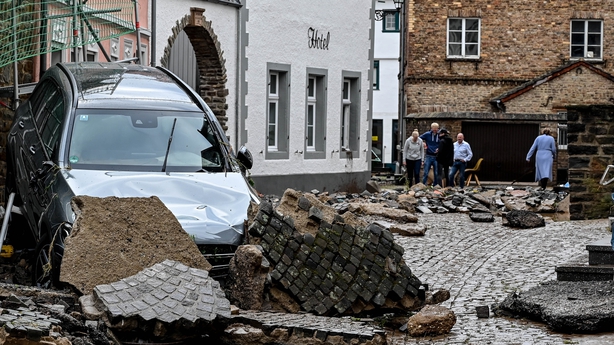 On a visit to Washington, German Chancellor Angela Merkel said her "heart goes out" to the victims of the flooding.

"I fear that we will only see the full extent of the disaster in the coming days," she said, adding that the government is doing its "utmost to help (people) in their distress".

US President Joe Biden, speaking alongside Merkel at a joint news conference, offered his "sincere condolences and the condolences of the American people for the devastating loss of life and destruction".

"I am worrying along with everyone who's in danger," she said, thanking "all the volunteers, fire fighters and emergency workers fighting tirelessly and with great effort against the deluge".

Ms Merkel said she was working with the nation's finance and interior ministers to determine how the government can get help to those that need it. 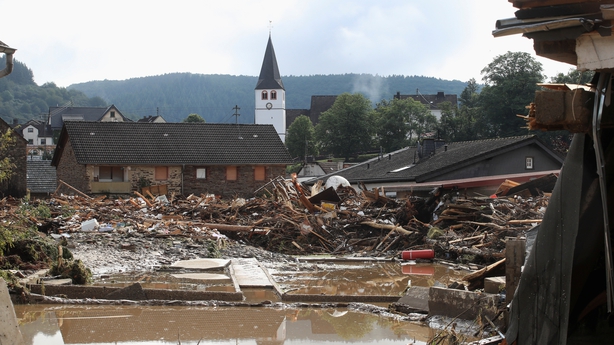 Emergency workers struggled to evacuate people in endangered buildings and two firemen were killed in the line of duty in the towns of Altena and Wedohl.

Another two men died in flooded cellars in nearby Solingen and Unna, while a further death was reported in Rheinbach. 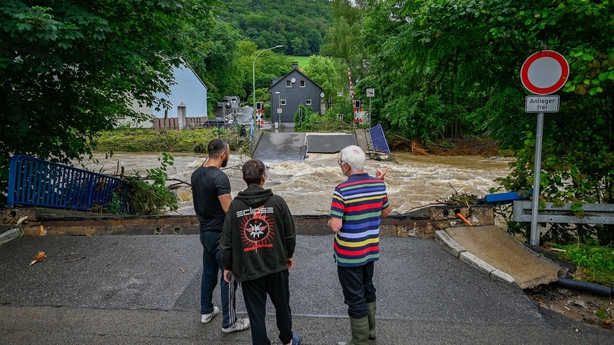 Police set up a crisis hotline for people to report missing loved ones and residents were asked to send in videos and photos that could help them in the search.

Rescue workers were deployed in helicopters to pluck desperate people off streets and rooftops. 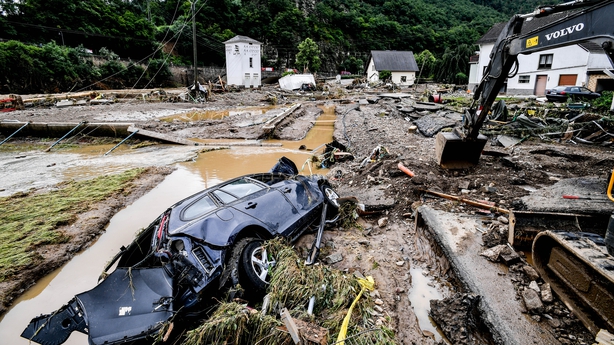 Nine people have died and around 50 are missing after flooding in western Germany that caused several houses to collapse | Read more: https://t.co/7dIbdep6AL pic.twitter.com/iHf4NgJeYg

Pensioner Annemarie Mueller, 65, looking out at her flooded garden and garage from her balcony, said her town of Mayen had been completely unprepared for the destruction.

"Where did all this rain come from? It's crazy," she told AFP, recalling the floodwater crashing through her street during the night.

"It made such a loud noise and given how fast it came down, we thought it would break the door down."

Regional official Juergen Pfoehler called on people to stay home "and, if possible, go to higher floors" of their homes.

"The situation is very serious," he said.

Belgium has seen several days of heavy rain that has caused rivers in the French-speaking region of Wallonia to burst their banks.

The provinces of Liege and Namur were especially affected, with the resort town of Spa completely flooded.

In the town of Chaudfontaine, daily Le Soir reported that nearly 1,800 people had to evacuate.

"We have rarely experienced such intense flooding. You have to go back to 1998 to have experienced this," Chaudefontaine mayor Daniel Bacquelaine told RTL radio.

The country's Infrabel rail network said it was suspending services in the southern half of the country, given the risks to travel.

"It is indeed impossible to ensure the safe movement of trains for passengers or to have access to strategic areas for their staff," Transport Minister Georges Gilkinet told Belga news agency.