South Africa's army has said it is deploying troops to two provinces, including its economic hub of Johannesburg, to help police tackle deadly violence and looting as unrest sparked by the jailing of ex-president Jacob Zuma entered its fourth day.

Overwhelmed police are facing mobs who have ransacked stores, carting away anything from boxes of alcohol to beds, refrigerators and bath tubs.

Six people have died, some with gunshot wounds, and 219 people have been arrested, according to a police tally.

"Parts of the country are reeling from several days and nights of public violence, destruction of property and looting of the sort rarely seen before in the history of our democracy," Mr Ramaphosa said in a nationally televised address.

The South African National Defence Force (SANDF) said it had "commenced with pre-deployment processes" after receiving a request for help.

Personnel will "assist law enforcement agencies deployed in Gauteng and KwaZulu-Natal provinces respectively to quell the unrest that has gripped both provinces in the last few days," the SANDF said in a statement.

The violence raged as the Constitutional Court was reviewing a landmark decision to jail Zuma for contempt of court. An announcement is expected later.

The country's top court on 29 June slapped Mr Zuma with a 15-month term for snubbing a probe into the corruption that stained his nine years in power. 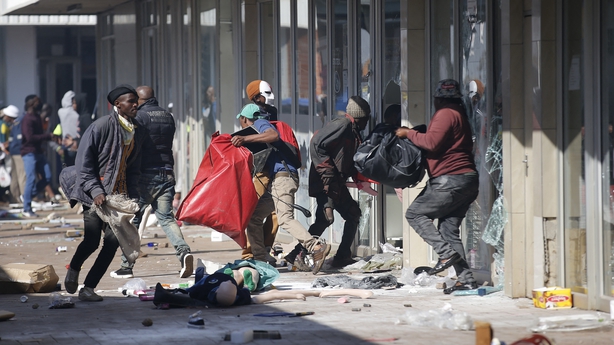 Mr Zuma began the sentence last Thursday but is seeking to have the ruling set aside.

"What we are saying is that this court made fundamentally rescindable errors," his lawyer Dali Mpofu argued in an on-line hearing before nine of the court's 11 judges.

Mr Zuma had been treated unfairly and his "right to mitigation was limited," he said.

But one of the judges, Steven Majiedt, bluntly said Zuma had been convicted "because he disobeyed the order of this court."

Mr Mpofu responded that Mr Zuma was being "punished for more than the disobedience" of a court order.

Despite his reputation for graft and scandal, the 79-year-old former anti-apartheid fighter remains popular among many poor South Africans.

The epicentre of the unrest is Mr Zuma's home region, the southeastern province of KwaZulu-Natal.

Shortly before the military's announcement, troops were seen on the streets of its capital Pietermaritzburg and smoke billowed from the roof of a large shopping mall.

Banks, shops and fuel stations in the city were shut on Monday.

A retail shop in Durban was looted Monday morning while in Eshowe, a town near Zuma's Nkandla home, police fired rubber bullets to disperse crowds after a supermarket was ransacked.

In Johannesburg, in Gauteng province, an AFP photographer saw a corpse at one site, although the cause of the death was not immediately known.

A police helicopter hovered over the Johannesburg suburb of Soweto, where looters casually made off with giant TV sets, microwave ovens, clothes and linen.

The unrest began on Friday, as protests triggered by Mr Zuma's detention 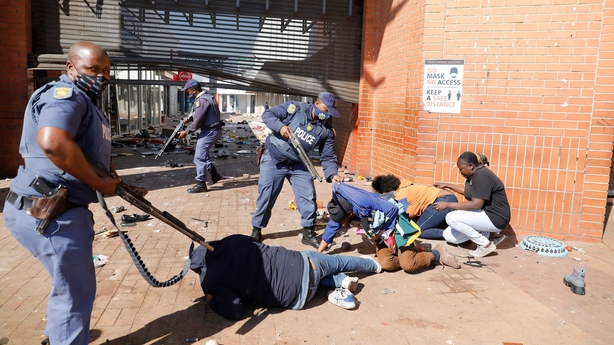 But looting soon dominated, reflecting hardship in a country hit by catastrophic unemployment and a toughening of anti-Covid restrictions.

"While there are those who may be hurt and angry at this moment, there can never be any justification for such violent, destructive and disruptive actions," he said.

Once dubbed the "Teflon president," Mr Zuma started serving the jail term after handing himself in to authorities as a deadline for surrender loomed.

On Friday he lost a petition at the Pietermaritzburg High Court to have his case thrown out.

The court said it was not empowered to interfere with rulings set down by the Constitutional Court and that Mr Zuma's claims about his health were not "supported by any evidence."

The anti-graft panel is probing the massive siphoning off of state assets that occurred during Zuma's 2009-2018 presidency.

He testified just once, in July 2019, but then swiftly withdrew his cooperation, saying he was offended at being treated as an "accused" and not as a witness.

Under the terms of his sentence, Mr Zuma could be back home before Christmas as he would be eligible for parole in less than four months.

He is due back in court on 19 July for a separate case where he faces 16 charges of fraud, graft and racketeering in an arms procurement scandal dating to 1999, when he was vice president.