The Taliban has claimed to be in control of 85% of Afghanistan, including a key border crossing with Iran, following a sweeping offensive launched as US troops pull out of the war-torn nation.

Hours after US President Joe Biden issued a staunch defence of the US withdrawal, the Taliban said fighters had seized the border town of Islam Qala - completing an arc of territory from the Iranian border to the frontier with China.

In Moscow, a delegation of Taliban officials said they controlled some 250 of Afghanistan's 398 districts - a claim impossible to independently verify and disputed by the government. 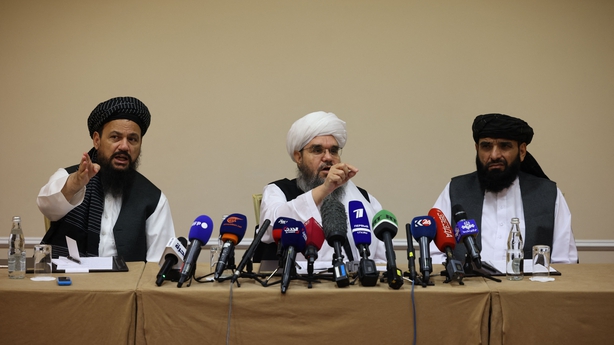 Separately, Taliban spokesman Zabihullah Mujahid told AFP the Islam Qala border crossing was "under our full control", while government officials in Kabul said a fightback was under way.

"All Afghan security forces including the border units are present in the area, and efforts are under way to recapture the site," an interior ministry spokesman said.

Read More:
US military mission in Afghanistan to end on 31 August - Biden
US says military withdrawal from Afghanistan over 90% complete
Peace and women's rights left 'hanging in the balance' in Afghanistan

Hours earlier, Mr Biden said the US military mission would end on 31 August - nearly 20 years after it began - having "achieved" its goals.

But he admitted it was "highly unlikely" Kabul would be able to control the entire country.

"The status quo is not an option," Mr Biden said of staying in the country. "I will not send another generation of Americans to war in Afghanistan."

With the Taliban having routed much of northern Afghanistan in recent weeks, the government is holding little more than a constellation of provincial capitals that must be largely reinforced and resupplied by air.

The air force was under severe strain even before the Taliban's lightning offensive overwhelmed the government's northern and western positions, putting further pressure on the country's limited aircraft and pilots.

Mr Biden said the Afghan people alone should determine their future, but he acknowledged the uncertainty about what that would look like. 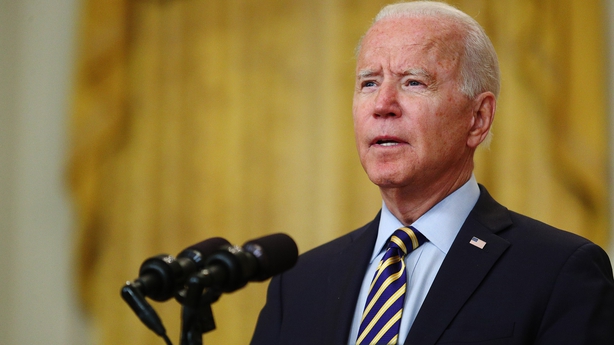 Asked if a Taliban takeover was inevitable, the president said: "No, it is not."

But, he admitted, "the likelihood there is going to be one unified government in Afghanistan controlling the whole country is highly unlikely".

The Taliban, for their part, welcomed Mr Biden's statement.

"Any day or hour that US and foreign troops leave earlier is a positive step," a spokesman said.

Afghan commandos have clashed with the insurgents this week in a provincial capital for the first time, with thousands of people fleeing Qala-i-Naw in northwest Badghis province.

President Ashraf Ghani said the government could handle the situation, but admitted difficulties lay ahead.

"What we are witnessing is one of the most complicated stages of the transition," he said in a speech in Kabul.
"Legitimacy is ours; God is with us."

The Taliban have been emboldened by the troop withdrawal and, with peace talks with the government deadlocked, appear to be pressing for a full military victory.

In Moscow, a Russian foreign ministry spokeswoman said the Taliban controlled about two-thirds of the Afghan-Tajik border as a delegation from the insurgents wound up a visit.

Some "85% of Afghanistan's territory" was under the group's control, said Taliban negotiator Shahabuddin Delawar.

This week more than 1,000 Afghan troops fled into Tajikistan in the face of a Taliban onslaught.