Tropical storm Elsa made landfall near Cuba's Bay of Pigs on its south-central coast after causing at least three deaths elsewhere in the Caribbean.

Cuba's Meteorology Institute said Elsa, which had previously wreaked havoc in parts of Barbados, St. Lucia, Haiti, Jamaica and the Dominican Republic, was moving northwest at 22 km per hour, and that sustained winds were peaking near 95 mph (59 mph)

Storm surges were affecting Cuba's southern coast, while parts of the country experienced strong rain and winds, the institute said.

More than 100,000 people in Cuba have been evacuated from flood-prone areas or unsafe housing in the potential path of the storm, most going to homes of family and friends, but thousands also to government shelters, state-run media reported.

#Elsa is currently over the Zapata Peninsula of Cuba, moving to the northwest at 14 mph. Rainbands have already been affecting the Keys, producing heavy downpours and gusty winds. The weather will continue to deteriorate this afternoon and tonight as the storm moves closer. pic.twitter.com/5vDujrvxOQ

Elsa comes as the Caribbean's island nations are already struggling with the economic impact of the Covid pandemic on their tourism-reliant economies and bracing for another especially active hurricane season.

Authorities and locals in some countries had already started work on repairing damage caused by Elsa, such as removing toppled trees and other debris and restoring power.

"We continue with maximum attention focused on the track of storm Elsa through Cuba," President Miguel Diaz-Canel tweeted early in the morning.

"Authorities are working all over the country."

The storm was expected to exit the country overnight just east of Havana between Mayabeque and the city of Matanzas, Cuba's meteorology institute said.

While such preparedness has typically enabled Cuba to avoid the kind of casualties from storms seen elsewhere, it comes amid Cuba's worst coronavirus outbreak since the start of the pandemic, raising fears that evacuations could fuel infections.

Farmers sped up harvesting of fruit and vegetables to save them from the storm while local authorities removed debris from streets to prevent them flying around in the wind, and some inhabitants along the coast moved their furniture to higher ground. 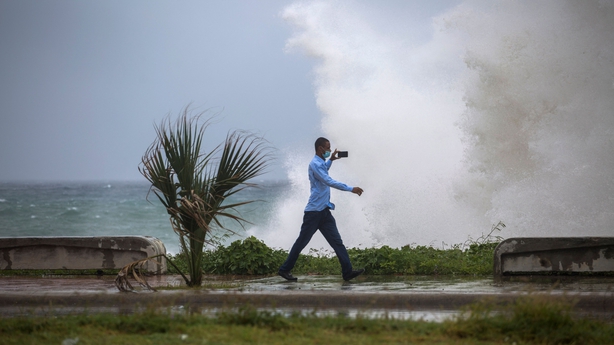 Rainfall of 5 to 10 inches with isolated maximum amounts of 15 inches was forecast across parts of Cuba on Monday and expected to result in "significant flash flooding and mudslides," the Miami-based U.S. National Hurricane Center (NHC) said.

The NHC said amounts of 2 to 4 inches of rain with localized maximum amounts up to 6 inches were expected across Florida and coastal Georgia through Wednesday, which might trigger isolated flash, urban and minor river flooding.

A few tornadoes were possible across south Florida on Monday night and across the Florida peninsula on Tuesday, the agency added.

"All Floridians should prepare for the possibility of heavy rain, flooding and potential power outages," Florida Governor Ron DeSantis wrote on Twitter. "Now is the time to restock your supplies and review your hurricane plan."

The approach of the storm forced Florida officials to demolish the remaining portion of a condo building that collapsed 11 days ago, killing at least 24 people with over 120 still missing.

Meteorologists are forecasting an above-normal 2021 Atlantic hurricane season, after a 2020 season that was the most active on record, producing 30 named tropical storms.