Rescuers in a Japanese holiday town hit by a deadly landslide were forced to suspend their search for survivors several times today as more rain hit the devastated area.

Two women were confirmed dead after torrents of mud crashed through part of the hot-spring resort of Atami in central Japan yesterday morning, following days of heavy downpours.

Nineteen people have been rescued and around 20 others are still missing, a spokesman for the town's disaster-management told AFP.

"We are doing our best to rescue survivors while carefully checking the weather and other conditions," he said.

The spokesman said around 130 homes and other buildings had been destroyed as the landslide swept through the residential area, leaving behind a quagmire that stretched down to the nearby coast.

Vehicles were buried and buildings tipped from their foundations, with an air-conditioning unit seen dangling from one devastated home towards the slurry below.

The spokesman said the landslide was one kilometre long and 120 metres wide at some points.

Hundreds of rescue workers and military personnel were combing through the mud and debris with diggers and on foot, climbing across cracked roofs and sticking poles into the ground to check for bodies. 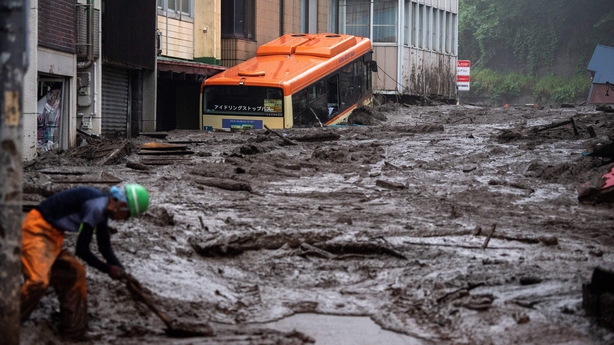 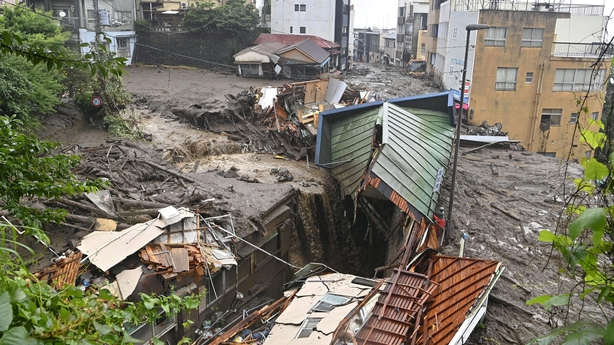 Survivors at a nearby evacuation centre told AFP of their panic when the landslide began.

"When I opened the door, everyone was rushing into the street and a policeman came up to me and said: 'What are you doing here, you have to hurry, everyone is evacuating'," one local resident told AFP.

Atami, around 90km southwest of Tokyo, saw rainfall of 313 millimetres in just 48 hours to yesterday - higher than the average monthly total for July of 242.5 millimetres, according to public broadcaster NHK.

Much of Japan is currently in its annual rainy season, which lasts several weeks and often causes floods and landslides.

More downpours are forecast in the coming days across Japan's main island.

"This rainy-season front is expected to keep causing heavy rain in many areas. There is a fear that land disasters could occur even when the rain stops," Prime Minister Yoshihide Suga told ministers at an emergency meeting.

NHK says that at least seven other landslides had been reported across Japan.

"Landslides can occur again and again at the same place even if the rain stops. Residents and rescuers should remain on alert," said Takeo Moriwaki, professor of geotechnical engineering at Hiroshima Institute of Technology.

The Atami disaster spokesman said 387 residents had been evacuated, with survivors in face masks seen reading newspapers with images of the disaster on the front page.

Residents in many other cities in Shizuoka have also been ordered to evacuate.