The first trial under Hong Kong's new national security law has begun without a jury, a watershed moment for the financial hub's fast-changing legal landscape.

Tong Ying-kit, 24, was arrested the day after the sweeping new law came into effect when he allegedly drove his motorcycle into a group of police officers during protests on 1 July last year.

Footage showed his motorcycle was flying a flag that read "Liberate Hong Kong, revolution of our times", a popular pro-democracy protest slogan that is now deemed illegal under the security law.

Mr Tong faces charges of inciting secession and terrorism, as well as a charge of dangerous driving.

He pleaded not guilty to all three charges as the trial began this morning.

"Liberate Hong Kong, revolution of our times" was little used until huge and often violent democracy protests convulsed Hong Kong for months in 2019 where it became the dominant rallying cry. 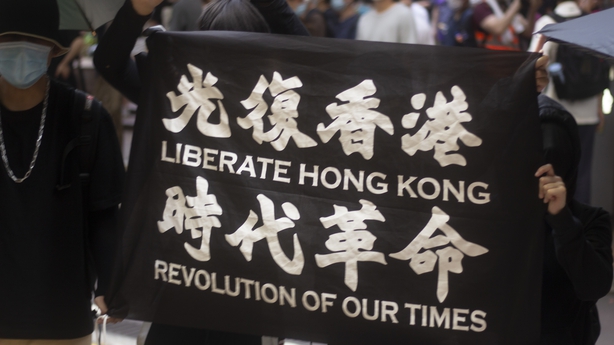 For some, it meant advocating for full independence. But for many others, it was a broader call for democracy or greater autonomy as well as a cry of frustration at Beijing's rule.

Mr Tong's trial is a key legal test for whether the slogan is now illegal.

As they opened their case, prosecutor Anthony Chau said his team would show the phrase meant separating Hong Kong from China, or seeking "regime change".

Mr Chau added that the terrorism charge was justified because Mr Tong was trying to coerce the government "to pursue a political agenda".

Two courts rejected Mr Tong's plea to have his case heard by a jury, which his legal team had argued was a constitutional right given that he faces a life sentence if convicted.

Trial by jury has been a cornerstone of Hong Kong's 176-year-old common law system and is described by the city's judiciary on its website as one of the legal system's "most important features".

But the national security law, which was penned in Beijing and imposed on Hong Kong last year after the democracy protests, allows for cases to be tried by three specially selected judges.

Mr Tong's legal team has yet to decide whether to bring their case to Hong Kong's Court of Final Appeal.

However, the wording of Beijing's security law makes clear that it trumps any local regulations in the event of a dispute, something successive court rulings have already upheld.

Mr Tong's case is unusual because he is the only Hong Konger so far charged under the security law with an explicitly violent act.

More than 60 people have now been charged under the law, including some of the city's best-known democracy activists, but their offences are related to political views or speech that authorities have declared illegal.

Hong Kong and Chinese authorities have hailed the security law for successfully restoring stability after the 2019 demonstrations.

The law furthermore grants China jurisdiction over some cases and empowers mainland security agents to operate openly in the semi-autonomous city for the first time.

It has removed the presumption of bail for non-violent crimes. Those charged have to instead prove to judges they will no longer pose any sort of national security threat.

The vast majority of those charged have been remanded into custody. Those released have faced a host of restrictions including house arrest, no contact with foreign officials and no media interviews or social media.

That announcement came minutes after the paper's board said it would cease operations "no later than Saturday".

Apple Daily has long been a thorn in Beijing's side, with unapologetic support for the city's pro-democracy movement and criticism of China's authoritarian leaders.

Its owner Jimmy Lai is in jail and was among the first to be charged under the law after its imposition last year.

Over the last week authorities used the law to raid the paper's newsroom, arrest six staff members and freeze assets.

The last move left the paper unable to pay staff or vendors. 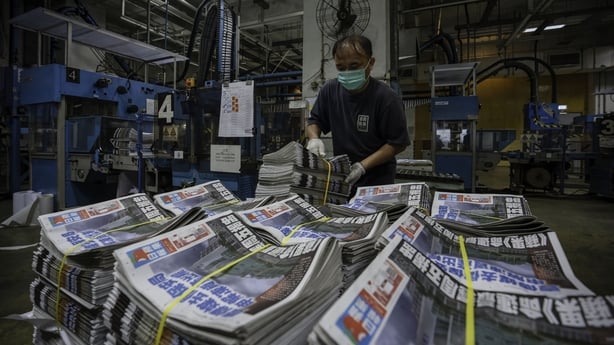 Mr Law and Mr Cheung were charged on Saturday and remanded into custody and today police arrested a senior columnist from Apple Daily on the same charge.

Yeung Ching-kee - who writes under the pen name Li Ping - was one of the paper's top columnists and the lead writer of their editorials, which express the editorial board's official views.