At least 43 people were killed and dozens injured on Monday when a packed Pakistani inter-city train collided another express that had derailed just minutes earlier, officials said.

Several people were trapped for hours in the mangled wreckage left by the collision near Daharki, in a remote part of rural Sindh province, before rescue workers with specialist equipment could reach them.

Huge crowds from nearby villages gathered around the carnage of the overturned Pakistan Railways carriages, with twisted and shredded metal scattered across the ground, along with piles of luggage.

The double accident happened in the early hours of the morning when most of the 1,200 passengers aboard the two trains would have been sleeping.

Mobile phone footage shown on television from the site revealed the wreckage, with several green Pakistan railway carriages lying on their side.

One clip showed medics giving an intravenous drip to a conscious passenger whose lower torso was trapped between crushed carriage benches.

The accident happened in a remote part of the province on a raised section of track surrounded by lush farmlands. 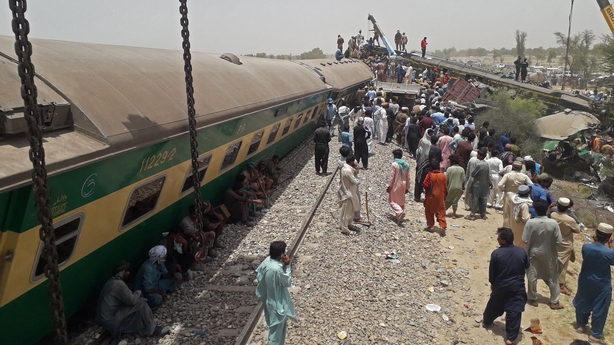 The Millat Express was heading from Karachi to Sargodha when it derailed before dawn, spilling carriages onto a track bringing the Sir Syed Express from Rawalpindi in the opposite direction.

Prime Minister Imran Khan said he was "shocked" by the accident and promised a full inquiry.

Lieutenant General Akhtar Nawaz Satti, chairman of the national disaster management authority, told private TV channel ARY that Pakistan army and paramilitary rangers had already reached the site from nearby bases to help with the operation.

The accident happened on a raised section of track surrounded by lush farmlands.

Interior Minister Sheikh Rashid, a former railways minister, said the track where the accident occurred was built in the 1880s and described it as "a shambles".

Current minister Azam Swati described the section of railway as "really dangerous", but said authorities had been waiting to upgrade the network with funding from the multi-billion dollar China-Pakistan Economic Corridor project.

"In case there is a delay (with funding), we will rebuild this track with our own money," he said.

The Pakistan army and paramilitary rangers from nearby bases were at the site to help.

Gul Mohammad, who works with the Edhi Foundation ambulance service, said communication problems were hindering the coordination of the rescue efforts.

"I am talking to you as I stand on the rooftop of my ambulance for better signal," he told AFP.

Train accidents are common in Pakistan, where the network has seen decades of decline due to corruption, mismanagement and lack of investment.

The majority of train passengers in Pakistan are working-class people who cannot afford the quicker bus journeys.

More than 300 people were killed and 700 injured in 1990 when an overloaded 16-carriage inter-city train crashed into a stationary freight train near the city of Sukkur in Sindh.

More recently, at least 75 people died when a train caught fire while travelling from Karachi to Rawalpindi in October 2019.

The rest of the transport sector does not fare much better, with two major passenger plane crashes in the past five years and thousands of road accidents.