A burnt-out container ship that has already caused one of Sri Lanka's worst maritime environmental disaster is sinking with nearly 350 tonnes of oil in its fuel tanks.

Dutch salvage firm SMIT attempted to pull the still-smoking wreckage of the 31,600-tonne vessel into deeper water but the effort stalled.

Navy spokesman Indika de Silva said that the stern had sunk to the bottom at a depth of 22 metres, near Pamunugama, just north of Colombo.

"The bow is still afloat, but the stern is submerged and resting on the sea bed," Mr de Silva said. 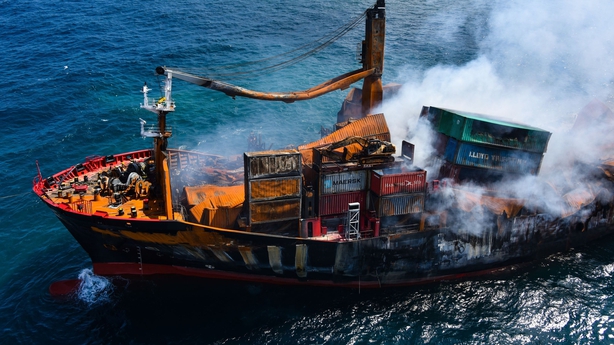 The 186-metre ship was still tethered to a powerful tug as experts considered whether to attempt to refloat it, an official source involved with the operation said.

A huge amount of plastic debris has already inundated beaches, and authorities now fear an even greater disaster should the ship's 297 tonnes of heavy fuel oil and 51 tonnes of marine fuel oil leak into the Indian Ocean.

A photographer who reached the area by boat said he saw a narrow slick of oil coming from the stern of the Singapore-registered vessel.

Some oil was already visible near the beaches of Negombo, about 40 kilometres from Colombo, although it was not clear if it was from the stricken ship.

Mr de Silva said an Indian coastguard vessel was in the area with specialised equipment to deal with any oil leak.

Officials believe the blaze destroyed most of the 1,486 containers on board.

Eighty-one containers were carrying chemicals, including 25 tonnes of nitric acid which had been leaking since 11 May, nine days before the fire broke out.

The inundation of microplastic granules from the cargo has already forced a fishing ban and prompted concern for wildlife and the marine environment.

Marine Environment Protection Authority chief Dharshani Lahandapura said the ecological damage was still being assessed but believed it was the "worst ever in my lifetime".

President Gotabaya Rajapaksa asked Australia on Monday to help evaluate the ecological damage to the island, one of the most bio-diverse countries in South Asia. 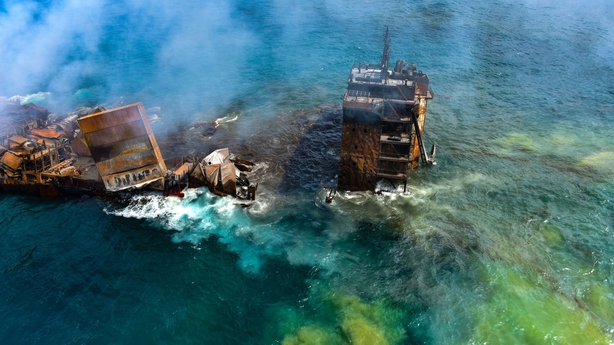 The head of Sri Lanka's Catholic Church, Cardinal Malcolm Ranjith, called for legal action against authorities for allowing the ship into local waters.

He said the livelihoods of thousands of fishermen, most from the country's Catholic minority, were under threat.

Authorities suspect the crew knew about the acid leak from 11 May.

Police said three officers from the ship, two Russians and an Indian, had been questioned and their passports impounded.

The ship was heading to Colombo from Gujarat in India when the blaze started, having previously visited Qatar and Dubai where the containers of 25 tonnes of nitric acid were loaded.

The 25-strong crew was evacuated last week. One was admitted to hospital with minor injuries.