Two US agencies have said they are investigating a Tesla crash in Texas on Saturday that left two people dead and which local police said appeared to have occurred with no one in the driver's seat.

The National Highway Traffic Safety Administration (NHTSA), which regulates vehicle safety, and the National Transportation Safety Board (NTSB) both said they would investigate the crash.

NHTSA said it "has immediately launched a Special Crash Investigation team to investigate the crash. We are actively engaged with local law enforcement and Tesla to learn more about the details of the crash and will take appropriate steps when we have more information".

The 2019 Tesla Model S was traveling at high speed near Houston, when it failed to negotiate a curve and went off the roadway, crashing into a tree and bursting into flames, local television station KHOU-TV said.

After the fire was extinguished, authorities located two occupants in the vehicle, with one in the front passenger seat and the other in the back seat of the Tesla, the report said, citing Harris County Precinct 4 Constable Mark Herman.

Mr Herman said police had not yet determined whether the driver-side airbag had deployed and whether the car's driver assistance system was engaged at the time of the crash. 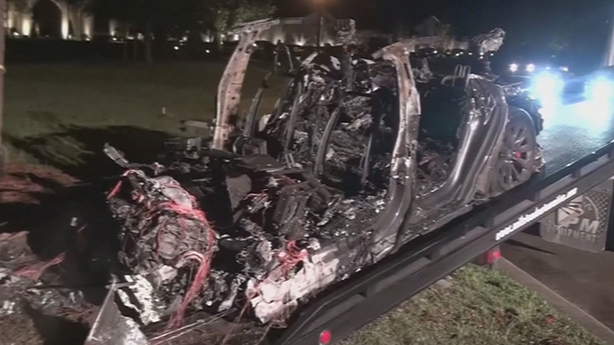 Tesla, whose shares were down 3.8% today, did not immediately comment.

Autopilot was operating in at least three Tesla vehicles involved in fatal US crashes since 2016. NHTSA has sent teams to at least three other Tesla crashes in recent weeks that were believed to be tied to Autopilot use.

Last month, NHTSA said it had opened 27 special crash investigation teams into crashes of Tesla vehicles, 23 of which remain active, and at least three of the crashes had occurred recently.

The NTSB, which makes safety recommendations but cannot compel recalls, said it would send two people to conduct a safety investigation into the Texas crash focusing "on the vehicle's operation and the post-crash fire".

Last year, the NTSB concluded "NHTSA's approach to the oversight of automated vehicles is misguided, because it essentially relies on waiting for problems to occur rather than addressing safety issues proactively".

It added NHTSA has "taken a nonregulatory approach to automated vehicle safety".